Leeds take on Brighton in the Premier League on the 15th of May knowing that anything but a win could prove detrimental to their top-flight status. The Seagulls arrive on the back of a hugely impressive win over Man Utd and have had a full week to prepare for this game.

We're backing the Seagulls to beat Leeds this weekend just as they have done on five of the pair's last seven league meetings. Leeds have injuries and suspensions to deal with on Sunday and have lost their last three matches on the run while Brighton have won four of their last six outings, three of which have arrived away from home.

Belgium's Leandro Trossard joint-top scores for Brighton in the league this season with 8-goals, and we're backing the 27-year-old to find the back of the net against Leeds this weekend. The Belgian international is enjoying his best scoring season for the Seagulls since making the move from Genk in 2019 and has found the back of the net in four of his last five league games for Brighton.

All you need to know ahead of Leeds vs Brighton

Must-win game for Leeds in their final home game

Leeds knew they would have to be at their very best to beat Chelsea in midweek and sadly for the hosts, they weren't. Chelsea took the lead through Mount after just 4-minutes and things went from bad to worse for the hosts when James was sent-off midway through the first half. Chelsea used their man advantage well, scoring two more goals in the second forty-five to wrap up a comfortable 3-0 victory.

Brighton played host to man Utd last weekend and absolutely dominated the game from start to finish, embarrassing the Red Devils. Caicedo fired the hosts in front from the edge of the box and early in the second half, Cucurella made it 2-0. Gross got in on the action in the 57th-minute, wrapping up the points, and on the hour mark, Trossard added the icing to the cake with Brighton's fourth goal of the game.

Leeds: Roberts, Raphinha, Bamford, Forshaw, Summerville, Dallas and Harrison are all injury concerns, while Ayling and James are suspended.

Brighton: Sarmiento, Moder and Mwepu could miss the trip to Yorkshire via injury. 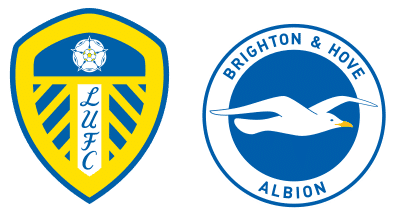