Brighton sit 9th in the Premier League table and this weekend they play host to bottom of the table Burnley. Sean Dyche's men have 14pts on the board but do have games in hand over the teams above them and a win on Saturday could take them above Watford and Norwich.

Under 2.5 goals have been produced in four of the last seven league meetings between these two clubs, and we're expecting another low-scoring 90-minutes this weekend. Five of Brighton's last six outings in all competitions have produced under 2.5 goals, while each of Burnley's last four fixtures have witnessed fewer than three goals scored.

Can Burnley return to winning ways at the AmEx?

Brighton made the trip to Old Trafford on Tuesday night where the pair went in goalless at the half-time interval. Just 6-minutes into the second forty-five, Ronaldo put Man Utd in front and things went from bad to worse for the Seagulls 3-minutes later when Dunk was shown a straight red card. Manchester United wrapped up the 3pts deep into stoppage time when Fernandes was set up by Pogba to make it 2-0. Despite that result, Brighton sit 9th in the table and could move above Tottenham if they win this weekend.

Burnley had the home advantage against free-flowing Liverpool and gave a very good account of themselves. However, a solitary goal from Fabinho in the 40th-minute proved enough for the visitors to claim a narrow 1-0 win. Burnley remain bottom of the Premier League table but still have games in hand on all of the teams above them. However, Sean Dyche's men must start winning some of these matches if they want any chance of avoiding the dreaded drop back into the Championship and most worry that they don't have the goals in them to survive.

Brighton: Sarmiento and Mwepu are injury concerns, while Dunk is suspended.

Burnley: Vydra, Taylor and Weghorst could miss the game through injury, while Gudmundsson has been suffering with an illness. 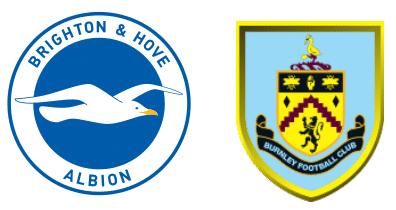