In the late 1960s and early 70s, something special happened in the Midlands, as Derby County won the English First Division title just three years after being promoted from the second tier.

It was the Rams’ first ever championship; they had finished runners-up on three occasions previously and won the FA Cup in 1946, but generally the club had spent much of their history yo-yoing between the top two divisions up to that point.

Brian Clough was the man at the heart of it all. Unexpectedly propelling the club from the doldrums of mid-table nothingness in Division Two, County were soon at the pinnacle of the domestic scene and heading into European competition. 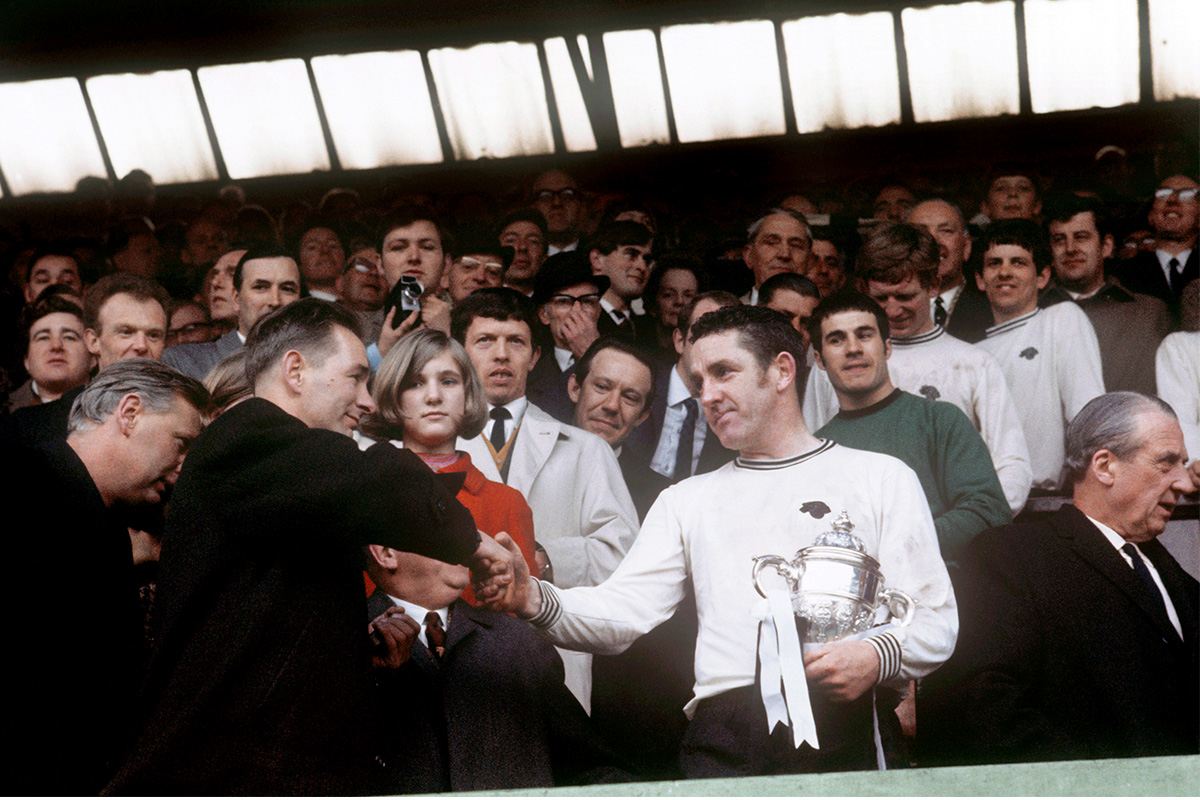 Fortified by zeal and intense personal ambition, Clough went about setting new standards for a club that previously knew little of success. His results were sensational; his manner provocative, but in the process he became one of the first great managerial personalities to grace the game.

Clough had enjoyed a prolific playing career – scoring almost 200 goals during a six-year spell with hometown club Middlesbrough, and an incredible 54 in 61 games for Sunderland. A sharp finisher with an exceptional goals to games ratio, his lack of international opportunities rankled with him. He was handed two full England caps before his career was ended prematurely at the age of 27 when he tore the medial and cruciate ligaments in his right knee following a collision with a goalkeeper. 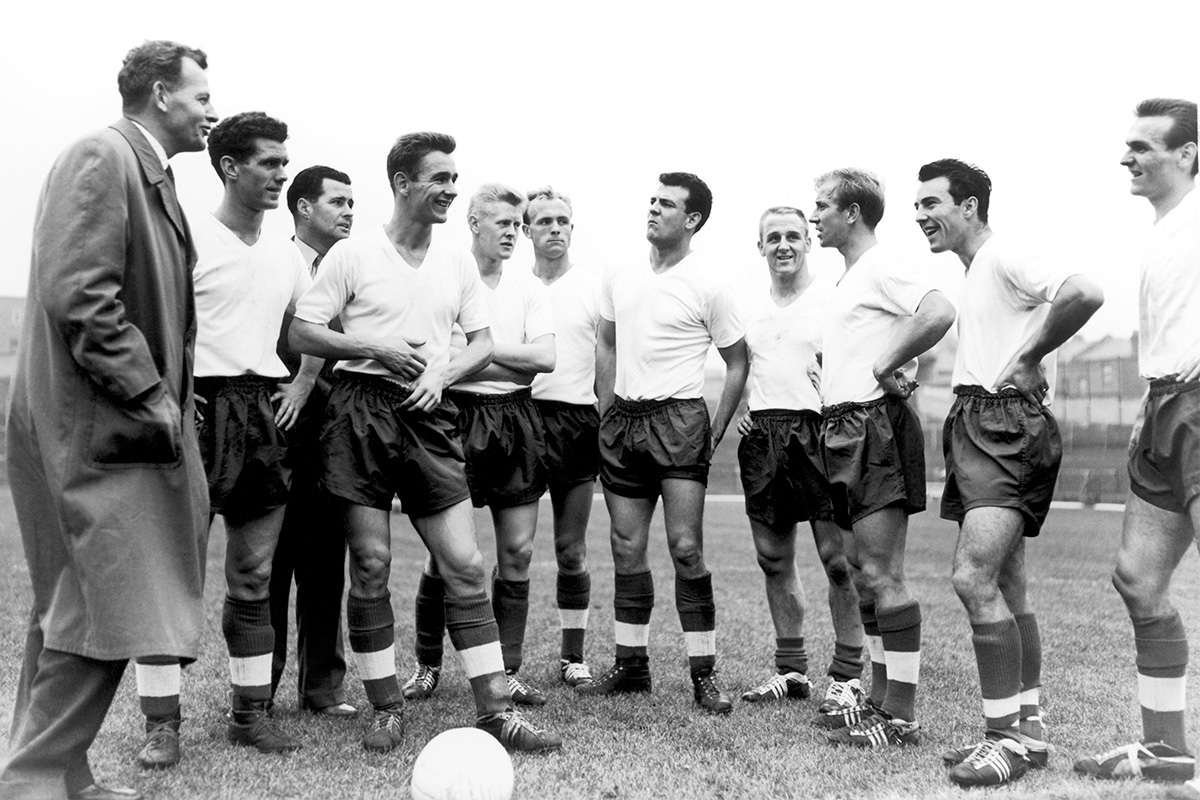 After two years on the sidelines and a brief flirtation with a return to playing, Clough entered the realm of coaching, working with Sunderland’s youth team. Remaining in the North East, he was given his first managerial role with Hartlepool United in October 1965. His first order of business was to offer Peter Taylor, then manager of Non-League outfit Burton Albion, the role of assistant. The decision heralded the beginning of one of English football’s most effective off-field partnerships.

The duo, who had first struck up a friendship whilst playing together for Middlesbrough, led Hartlepool into the top half of Division Four, a noteworthy achievement considering the club had spent recent years lingering near the bottom of the league pyramid.

After building a decent reputation at the lower end of the Football League, Clough was appointed manager of Derby County in May 1967. Once again Taylor followed him, and once again they would succeed.

At the time of Clough’s arrival at the Baseball Ground, the Rams had been without top-flight football for 14 years. Despite their promotion from the third tier in 1957, the club had not once threatened to return to the First Division, even finishing as low as 17th place in the 1966/67 campaign.

Derby’s prospects would change significantly under Clough’s auspices, though there were few signs of imminent improvement throughout his first year in charge. The team slipped further down the league table, finishing 18th, but the building blocks were being put in place on and off the field.

As one of English football's top manager's of all time, Clough’s ruthless approach to the organisation of the club was witnessed in the squad’s turnover; only four players present upon his appointment would remain. This ruthlessness continued away from the field of play, as he sacked the club’s secretary, groundsman and chief scout. In the wake of these departures, he brought in his own personnel, making use of his and Taylor’s renowned transfer nous. 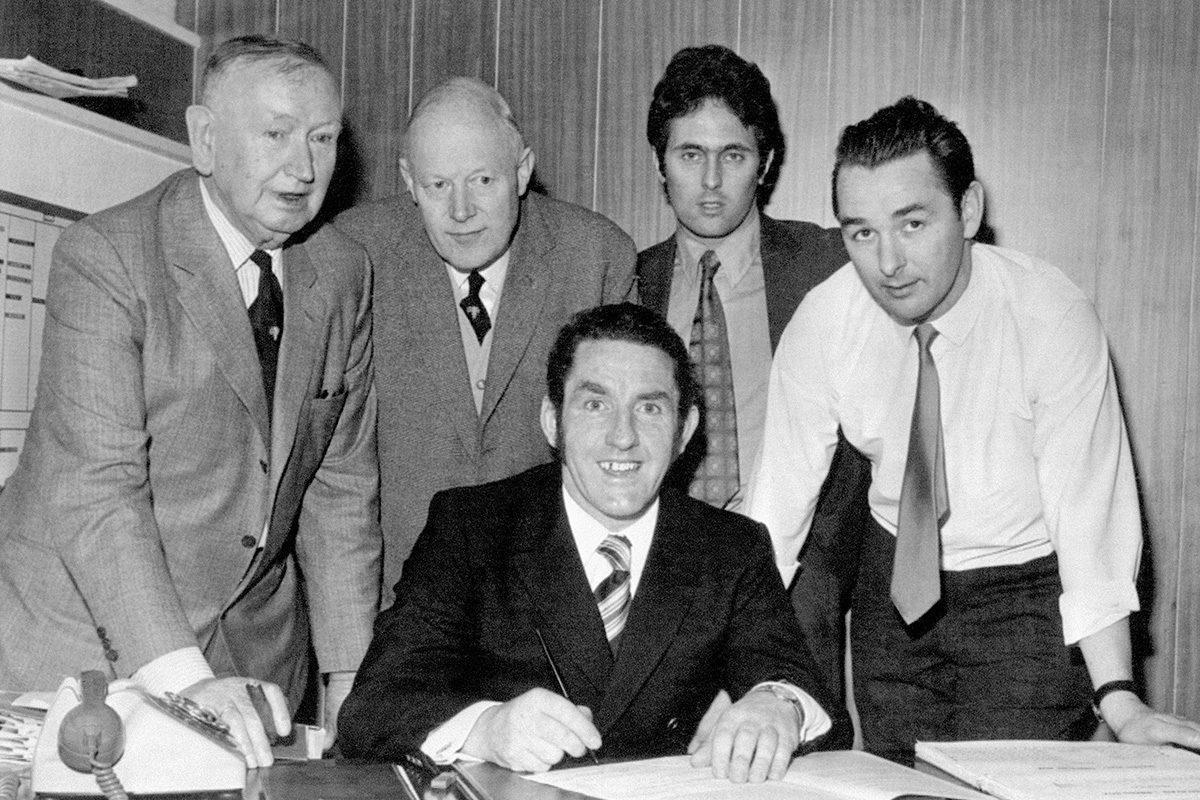 Clough and Taylor had watched Roy McFarland playing for Tranmere Rovers during their time at Hartlepool and made the centre-back, then just 19 years of age, their second signing after taking over at Derby. A reliable and skilled defender, McFarland was signed from under the noses of Liverpool for a fee of £25,000 and would go on to captain the team.

Further forward, Alan Hinton arrived from Midlands rivals Nottingham Forest for £30,000. At the time, Hinton was seen as a relatively unspectacular wide man but his superb crossing, eye for goal and ambidexterity made him a genuine attacking threat on either foot.

Up front, Clough moved to bring in John O’Hare, a player with whom he had worked during his time as Sunderland youth coach. Signing for a fee of £20,000, there was initial scepticism as to the centre-forward’s quality, but he brought the sort of hold-up and link-up play that Clough desired to build his attack around.

Experience was added to the line-up in 1968 through the addition of tough tackling Scottish half-back Dave Mackay from Tottenham for £5,000. The hard-working John McGovern, who had broken through at Hartlepool under Clough as a teenager, followed for £7,500 and quickly asserted himself on the right side of midfield. 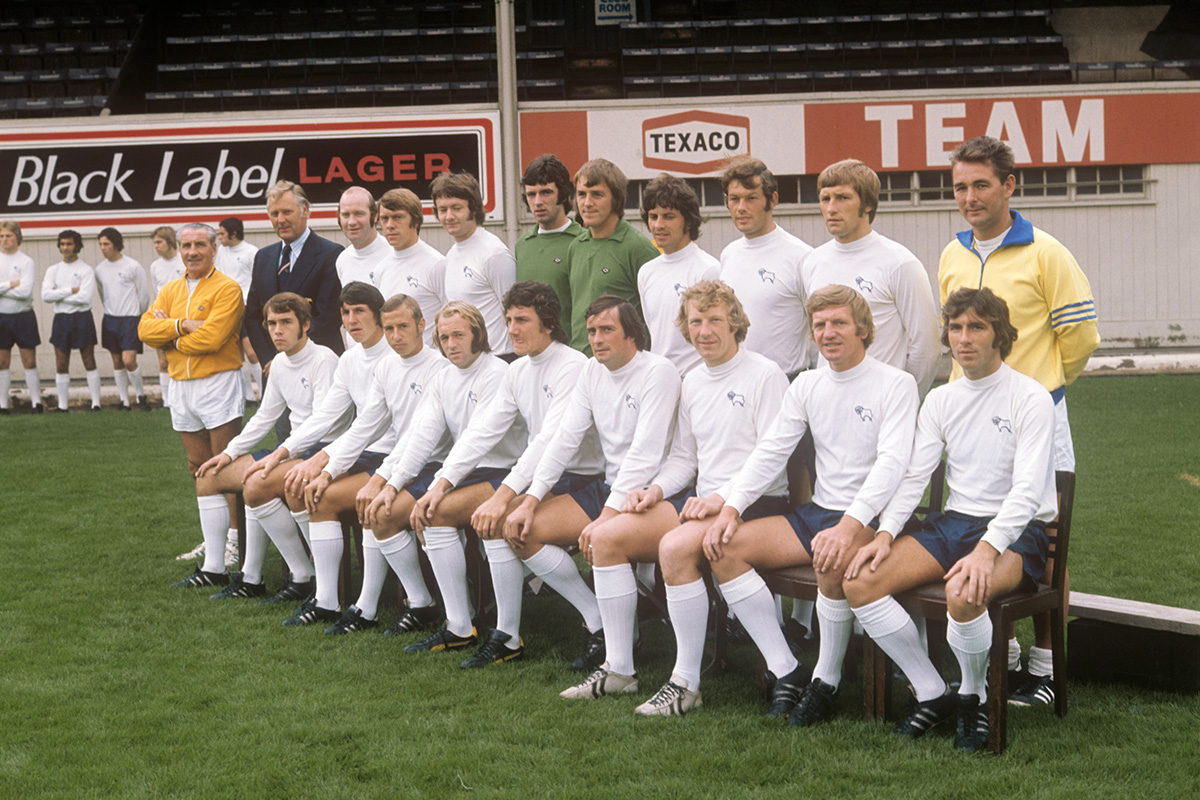 The foundations for success had been laid down and Derby, in Clough’s second term in charge, won the 1969 second division at a canter. Such was the quality of the team Clough had assembled, few additions were needed for the club to compete upon their long-awaited return to the top flight.

Archie Gemmill, a relentless, quick-footed midfield dynamo, was convinced to sign after a particularly enthusiastic pursuit by Clough. As the story goes, the County boss refused to leave the Gemmill’s house having been told the player would not agree to a transfer, staying the night and concluding the deal over breakfast the following morning!

After leading the club to survival comfortably with -fourth and ninth-place finishes in 1970 and 71, Clough then signed Colin Todd from Sunderland for a British record fee of £175,000 to partner McFarland in central defence, further solidifying his back line.

Derby were forcing their way up the English footballing hierarchy swiftly while playing an aesthetically pleasing brand of football. Clough sparked a rivalry with Don Revie over the Leeds United manager’s more pragmatic tastes, time and again stating his preference for style and elegance in victory.

“A team blossoms only when it has the ball,” Clough once said. “Flowers need the rain – it’s a vital ingredient. Common sense tells you that the main ingredient in football is the ball itself.”

With a trusted right-hand man in Taylor, a keen eye for a player and resolute team building ability, Clough melded a cohesive unit capable of challenging for honours. And, with surprising speed, his Derby won the title in 1972, pipping Revie’s Leeds – as well as Liverpool and Manchester City – to top spot by a single point.

That remarkable achievement was the peak of Clough’s time with Derby, though he would also lead the club into the semi-final of the European Cup the following season. Having thrashed Portuguese giants Benfica 3-0 on aggregate along the way, the Rams’ journey culminated controversially in Turin, Italy, where they succumbed 3-1 to Juventus. 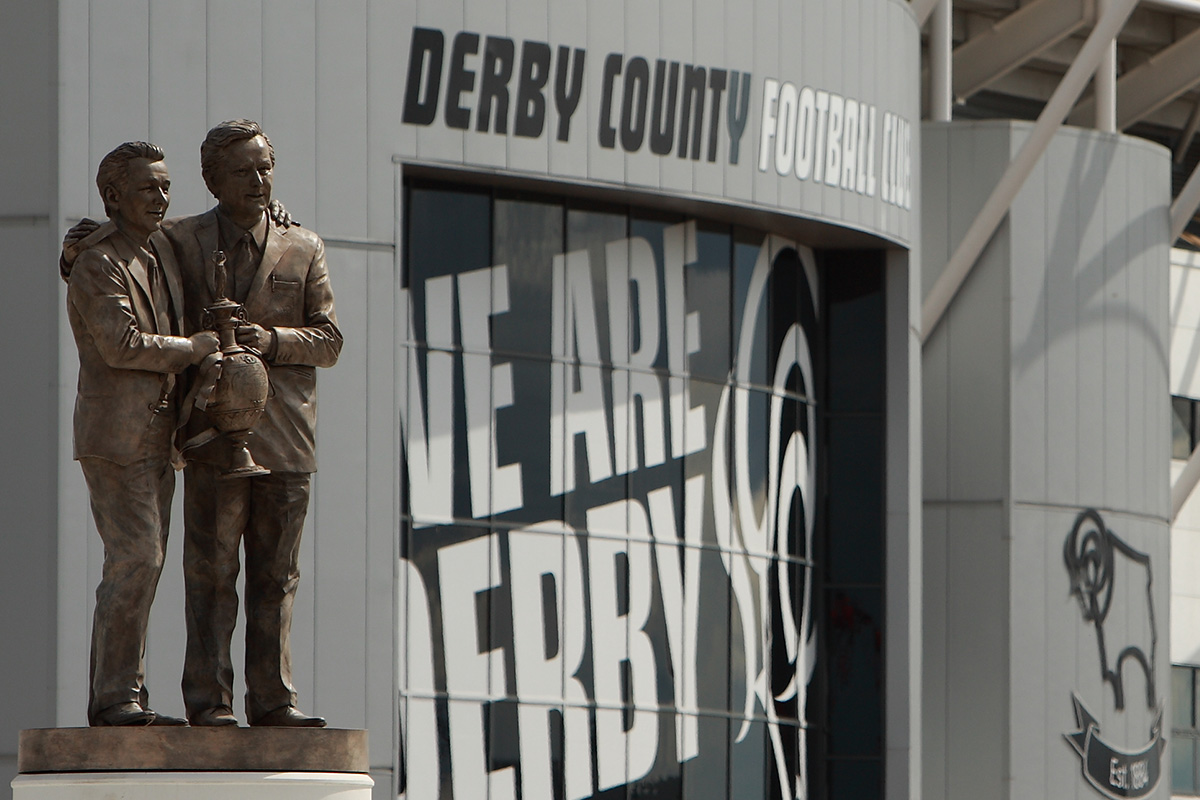 The defeat provoked one of Clough’s famed outbursts. He said: “No cheating bastards do I talk to. I will not talk to any cheating bastards,” refusing to discuss the game with the local press and alleging that the Italian side had bribed the referee on the night.

Clough was an obsessive winner and only trophies could satiate his thirst. In the process he often took matters into his own hands, signing Leicester City left-back David Nish for a record fee of £225,000 without consulting Derby’s board of directors in August 1972. He was also outspoken, frequently criticising his primary rivals Leeds and Revie, and even knocking his own fans and board on occasion.

This all played a part in creating an unmistakable persona, one that resonates to this day. At a time when English football was punctuated by conservativism, he rebelled not only against authority, but against convention. Indeed, his ongoing feud with Derby chairman Sam Longson would eventually lead to the end of his and Taylor’s time with the club in 1973 following a seventh-place finish earlier that year.

Brazen, openly arrogant and at times charming, Clough garnered media attention like no other English manager had done before him. His aura permeated the teams he managed and Derby were one of the first to benefit. He took the club to yet new heights and left his own indelible mark both on and off the pitch.

For Derby, these were almost unrepeatably heady days. But for Clough, it was just the beginning…