Blackpool vs Swansea: Check out our betting tips

Swansea were absolutely obliterated in the week as they fell to a 5-1 defeat against Fulham. Can they bounce back here? Find out with our Blackpool vs Swansea match preview with free tips, predictions and odds mentioned along the way.

Both of these sides have been in mixed form of late and, as such, we are sitting on the fence and calling this a draw. Swansea were smashed 5-1 last time out but did have 10 men for a long time; that and the fact they were up against a Fulham side that are head and shoulders the best team in the league is important context. Before that, they'd won three of four games. That means they've taken nine points form 15. Blackpool aren't in too dissimilar place minus the heavy defeat; they've taken seven points from 15 having won their last two games. The indifferent form combined with Swansea feeling the need to tighten up after that Fulham game means this ends level in our minds.

Here are the key stats & form guide for Blackpool vs Swansea

Blackpool might only be set for a midtable finish but that's a remarkable achievement when you consider how the other newly promoted sides have performed this season. If the Seasiders can grab a win here then they'll be well on course to break into the top 12; that would be a very decent season.

Swansea's results change as quickly as the weather right now. They're hot, they're cold and, seemingly, never just simmering nicely. That inconsistency is why they're in the bottom half. Russell Martin might would argue a season of progression if he can get his team into the upper half of the table come the end of April. 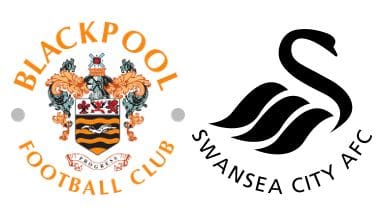