Luton are looking good for a top six finish. Can they keep the good times rolling here? Find out with our Luton vs Blackpool match preview with free tips, predictions and odds mentioned along the way.

Although Blackpool are coming off a 6:1 win, they have struggled to win games recently; that was Blackpool's first win in six games, they lost three and drew two of their previous five games. It's worth noting that Blackpool have found it difficult to win games on the road; they won just one of their last 13 games away from home, with five draws and seven losses. On the other hand, we have a Luton side that's fighting for a place in the Premier League next season; they are coming off back-to-back wins, and have just one loss in their last seven games. Considering both teams' respective form, we are making the prediction that Luton will take all the points here.

Meetings between Luton and Blackpool tend to feature lots of goals, four of their last five meetings went over 2.5; it's fair to point out that three of those encounters saw at least four goals, with both teams scoring in three of those five clashes. Furthermore, Luton Town have not had too much trouble finding the back of the net; as they've done so in 12 of their last 13 games. Similarly, Blackpool scored six goals in their last game; they've scored nine times in their last three games. With this in mind, we should expect goals at both ends.

Here are the key stats & form guide for Luton vs Blackpool

Luton vs Blackpool: Let's look at the predicted lineups

The Championship is full of big teams. Neither Luton or Blackpool are that, what they are, however, is two teams who have equipped themselves well this season and had seasons to be proud of – albeit to different levels. Luton, in particular, could yet write an almighty chapter into their history depending how they finish the campaign.

Luton have enjoyed some good form the past couple of months; they are coming off two consecutive wins, and have lost just once in their last seven games. With three games left to play, Luton will look to secure a place in the promotion playoffs; they'll be eyeing their third win in a row as they take on Blackpool.

Blackpool are coming off an impressive 6:1 win against Birmingham; they were winless in five games prior to that win, with two draws and three losses. Neil Critchley's men will take a trip to Kenilworth Road on Saturday; they'll hope to get their second consecutive win.

A quickfire FAQ on Luton vs Blackpool 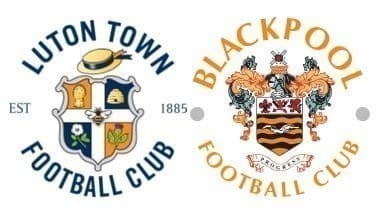