Birmingham vs Middlesbrough: Check out our betting tips

Middlesbrough remain in the hunt for a top six finish but, boy, could they do with three points here. Will they get them? Find out with our Birmingham vs Middlesbrough match preview with free tips, predictions and odds mentioned along the way.

Middlesbrough have had a much better season than Birmingham; however, they have struggled away from home over the course of their season. Boro have won 16 league games this season, and 12 of those wins were at home; they've won just four of 18 road games. In fact, Middlesbrough have no wins at the end of regulation time in their last seven away games. It's also worth noting that Boro lost their last two encounters with Birmingham; they've won just one of the last five meetings between these teams, with a draw and three losses. On that note, we're making the prediction that Birmingham will not lose this match.

Both sides to bag goals

Here are the key stats & form guide for Birmingham vs Middlesbrough

Birmingham players might have their eyes on the beaches right now as their seasons heads towards nothingness but Middlesbrough remain firmly focussed on the task at hand – making the playoffs. An away win would be much welcomed by Boro.

Birmingham have had some mixed results recently; they have two wins, two draws and two losses in their last six games. Lee Bowyer's men are 19th on the Championship table; they will hope to put more points between themselves and the relegation zone.

Middlesbrough followed a disappointing 4:1 loss at Sheffield United with a goalless draw at Millwall last weekend; they will play their third consecutive away game at the Riverside Stadium today. Boro will hope to get some momentum going ahead of their FA Cup quarter-final clash with Chelsea; they will fancy their chances against Birmingham. 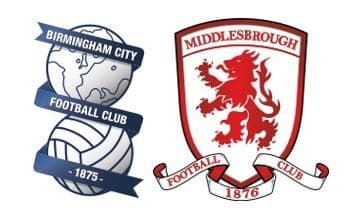