Luton to win, draw no bet

Luton are in a fantastic run of form right now and are in the mix for the playoffs as a result. Can they keep it going here? Find out with our Birmingham vs Luton match preview with free tips, predictions and odds mentioned along the way.

Backing Luton with a draw no bet

Luton Town are coming off three consecutive wins, and they have no losses in their last five games; Nathan Jones' men have lost just once in their last 11 games across all competitions. In contrast, Birmingham have not done too well over the past couple of months; they are coming off back to back losses, and have no wins in their last four games. As a matter of fact, Birmingham managed to win just one of their last 12 games in all competitions. Considering Luton won seven of their last nine games, they'll likely win this game; we're going with the safer option, draw no bet.

Check out the key stats & form for Birmingham vs Luton

Luton still have a shout at making the top six and a visit to Birmingham is another opportunity to add three points to their tally. For Birmingham, they're only a couple of wins away from certain safety. There is plenty to play for here.

Things have not been going too well for Birmingham the past couple of months; they've lost their last two games, and are winless in their last four games. Lee Bowyer's men have been slowly going down the Championship table, they've won just one of their last 12 games. Birmingham will hope to put an end to their rotting streak as Luton come visiting.

Luton extended their winning streak to three games by defeating Barnsley a couple of days ago; they've now won seven of their last nine games in all competitions. Nathan Jones' men will take on a struggling Birmingham side; they'll hope to string up four consecutive wins for the first time since September 2020.

A brief FAQ ahead of Birmingham vs Luton 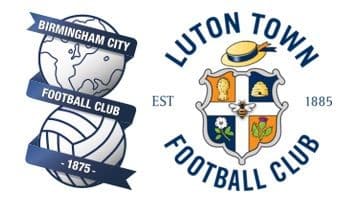