This match is very much a dead rubber. Who will win it? Find out with our Blackpool vs Birmingham match preview with free tips, predictions and odds mentioned along the way.

Blackpool's form has gotten worse recently; they have no wins in their last five games, a five game stretch where they scored just three goals. It's important to mention that Blackpool managed just one point from a possible 12 in their last four games. To be fair Birmingham have also struggled recently; they have just one win in their last six games, and they are coming off back-to-back losses. However, Birmingham tend to play well against Blackpool; they've won three of the last four meetings between these two, and have lost just once in their last eight clashes. Considering both teams have found it difficult to win games recently, we think this will likely end in a draw; however, considering the odds, we would like to cover Birmingham too.

Don't expect the goals to flow

We've mentioned that Blackpool scored just three goals in their last five games; we would also like to point out that they haven't scored more than one goal in any of their last seven games. As a result of this, most of Blackpool's games have been low-scoring games; five of those seven games went under 2.5, with four of them going under 1.5. Like Blackpool, Birmingham have had their fair share of low-scoring games; as five of their last six games went below the 2.5 goal line. Furthermore, meetings between these teams have not seen a lot of goals; as six of their last seven games saw less than three goals scored. On that note, this will likely be a low-scoring affair.

Here are the key stats & form guide for Blackpool vs Birmingham

Blackpool vs Birmingham: Let's look at the predicted lineups

Birmingham sit fifth from bottom but they're safe for another season in England's second tier. Blackpool, who came up last season, sit in 16th spot and eight clear of their visitors. With nothing really at stake for this game, everything is all about playing for pride.

Things have not gone too well for Blackpool the past few weeks; they are winless in their last five games, with two draws and three losses. Neil Critchley's men will welcome Birmingham to Bloomfield Road on Monday; they'll hope to put an end to their rotting streak with a win.

Birmingham have not exactly enjoyed the best form lately; they are coming off back-to-back losses, and they've managed just one win in their last six games. Lee Bowyer's men are 20th on the Championship table, with just 11 wins in 42 league games; they'll fancy their chances against an equally struggling Blackpool team.

A quickfire FAQ on Blackpool vs Birmingham 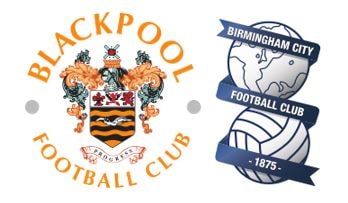