When people think of the best footballers of all time, they will usually talk about players from countries such as Brazil, Spain, Portugal, England, France, and a handful of others. You won’t often hear people talk of players from Algeria, but let us tell you now, this nation has produced some awesome talents over the years. And as it happens, we’d like to draw some attention to the best Algerian footballers of all time and give them the recognition that they deserve. To keep things balanced for our younger and older football fans, we’ve put together a blend of currently active players and all-time legends from this nation – so please read on and enjoy.

As promised, some of these guys are still creating their legacy by playing in their respective leagues/teams around the globe, and some have hung up their boots quite some time ago. Either way, they are all some of the best Algerian footballers to have ever played the beautiful game, so let’s get things started with player number one.

We may as well kick things off with one of the greatest superstars of Algerian football, Mehdi Cerbah. Not only has Cerbah starred for Algeria on the biggest stage in football, the World Cup, but he has also helped them towards an African Cup of Nations final in his time. Sure, they didn’t win either competition while Cerbah was playing for them, but his skills between the sticks showed that Algeria was a team to be reckoned with – even for the greatest teams in the world, shown by their famous victory over West Germany in the 1982 World Cup. Now that Carbah is almost 70 years of age, you won’t catch him on the field anymore, but you will find that he is still very active regarding coaching.

In terms of the best Algerian footballers, you won’t find any player that has played for a more prestigious club than Mahrez – playing for Manchester City, of course. He is undoubtedly one of the most successful Algerian players ever, at least on a domestic level, having won the Premier League on three separate occasions. One of these included the most famous underdog victory in football too, when Leicester managed to win the Premier League with Mahrez back in 2016. The other two came with his current club, Manchester City, and in terms of international football – Mahrez is a key player for Algeria.

Playing as a winger, he gives both Algeria and Manchester City the speed they need down the touchlines, and to wrap it all up, Mahrez is a two-time winner of the ‘Algerian footballer of the year’ award. 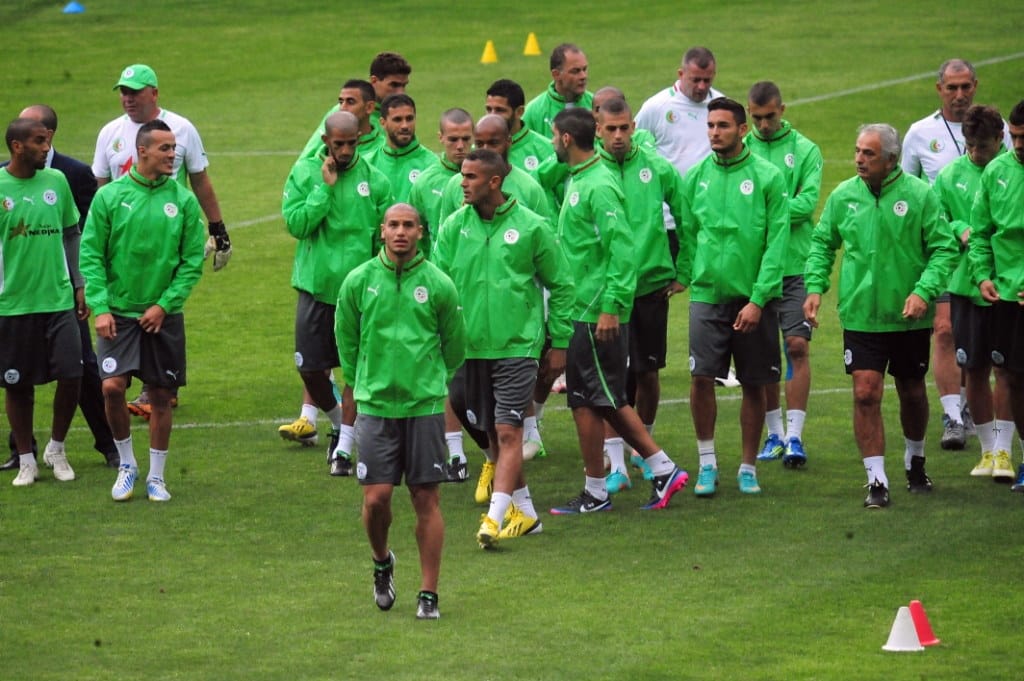 Having achieved 68 caps for Algeria in his time, and much like a few of the other guys here, he was part of the famous West Germany win during the World Cup of 1982. Assad went on to represent Algeria in the following World Cup of 1986 too, and he is currently the joint record holder for most goals scored at a World Cup for his country – sharing the record with Islam Sliamni. The guy was even awarded the best left-forward at the 1982 World Cup, largely thanks to his great shot power, his accuracy, and his sportsmanship too. These days, Assad is into his mid-60s, but while his playing days are well over, he is still managing different clubs as and when he gets the time.

Sticking with players that have been long gone for the pitch, we have Rabah Madjer. This guy was born in 1958, and he started his professional career 20 years later, playing for MA Hussein Dey originally. With that said, Madjer really announced himself as one of the best Algerian footballers ever when he played for FC Porto. It is this club where he developed his skills, started to bang in goals for fun, and displayed that he could be a true champion. This was reflected by the accolades achieved at the club too, winning a grand total of nine huge titles in a mere six-year spell at the club. Without question, Madjer is still regarded as one of Algeria’s best-ever strikers – and with good reason.

Last but by no means least, we have Slimani – a player that is still active in the world of football. Slimani was signed to Leicester City in 2016, and having been on loan spells at various clubs during his time there, he decided to make the move to Lyon in 2021. Sure, his domestic club record might not be amazing, but his international career most certainly is. He won the ‘Algerian Player of the Year’ award back in 2013, and he managed to win the African Cup of Nations with his side in 2019. This is something that not many Algerian players can boast about, and for us, this makes Slimani one of the best Algerian players that is currently active.

FAQs on the best Algerian footballers of all time

How did you actually create this shortlist of Algeria’s best players?

We looked back through more than 50 years of results and statistics from players that have represented Algeria on an international stage. This allowed us to come up with the five players you see above.

Are there any honourable mentions missing from this list?

Sure, there are many other players that we could have included that narrowly missed out. Some of these guys would include Miloud Hadefi, Rachid Mekhloufi, Mustapha Dahleb, and many others.

What major competitions does Algeria actually compete in right now?

In terms of international competitions, Algeria are regular competitors at the Africa Cup of Nations, and they are strong contenders to qualify for the World Cup too. Of course, the World Cup qualifiers are still taking place, so we do not yet know whether Algeria will make it. But given the talent of their current squad, things are looking promising.