Belgium vs Portugal is certainly one of the ties of the last 16. This is a game that either team could win on the day but it is also one that we are expecting to be full of quality throughout. Some may dub this tie ‘Lukaku vs Ronaldo' and with those two players on the pitch and in-form, the goals will surely flow.

Read on for our full match preview and prediction for Belgium vs Portugal in the European Championship.

Four of the last six meetings between these two countries have seen over 2.5 goals scored. despite the last encounter between Belgium and Portugal ending goalless, we're convinced that this last 16 tie will be action-packed. Belgium scored 7-goals during the group stage and over 2.5 goals have been scored in three of their last six international matches, while five of Portugal's last six outings have witnessed at least three goals being scored.

Four of the last seven head-to-heads between the pair have ended with both teams getting on the scoreboard, and we're backing goals in this game at both ends of the pitch. Belgium have scored at least one goal in each of their last six international matches, putting eight past Belarus in March. Both teams have scored in three of Portugal's last six outings, including their last two group games against France and Germany.

Belgium might not have the best of recent records against Portugal but we're backing Roberto Martinez's side to just do enough to edge their way past Portugal on Sunday. Belgium have won five of their last six matches in all competitions, including all three of their group games without Hazard and De Bruyne for the majority of those minutes. Portugal showed their vulnerable side against Germany and also failed to beat France, which suggests that they often struggle against the big teams.

Everything you need to know ahead of Belgium vs Portugal

Belgium the favourites but Portugal are the holders

Lukaku scored 3-goals as Belgium won all three of their matches in Group B and the Inter Milan hitman will be looking to steal the show against the tournament's top scorer, Ronaldo. Belgium managed to get Hazard, De Bruyne and Witsel plenty of game time in their final match against Finland and now the Red Devils are approaching full-strength and full match fitness, their confidence levels are bound to be improving as well.

Portugal have played a very attacking style of play in the defence of their European Championship, a style that has produced plenty of goals for Ronaldo but has coast them in defence against the bigger nations. Following their 3-0 win over Hungary, Portugal were brought back down to earth with a bang against Germany, losing 4-2, and then played out a 2-2 draw with France. Belgium possess just as good of an attacking threat as the French, possibly better, and it will be interesting to see just how the Portuguese cope with it.

CR7 to shine again on the Euros stage?

Cristiano Ronaldo has so far made Euro 2020 ‘his’ tournament and if he and the rest of the Portuguese players can dump Belgium out in the last 16 then surely they will have the confidence to go all the way and reclaim their trophy. Ronaldo is chasing his own personal milestone and would like to achieve it before Euro 2020 comes to an end. Not content with becoming the all-time leading goalscorer in the history of the European Championship, Ronaldo needs one more goal to break Ali Daei's record of 109 international goals, and you wouldn't bet against the Portuguese icon doing so on Sunday.

Belgium vs Portugal – Your Questions 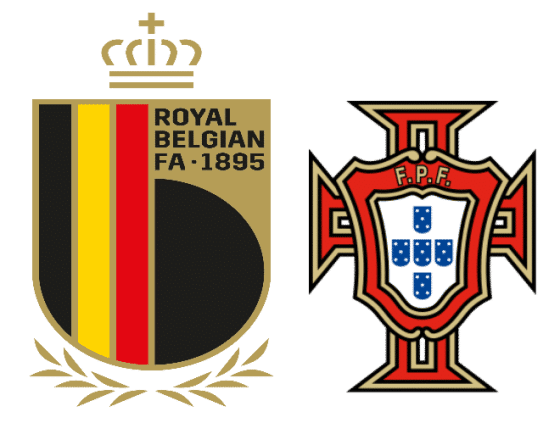