For many of the world's great managers, controlling games is key. And the easiest way to do this is through midfield.

Either through a possession-based style, quick transitions or effective counter-attacking, a strong midfield is often the base of many a great side. Think of the triumvirate of Andrés Iniesta, Xavi and Sergio Busquets at Barcelona. Or the dominant twosome of Roy Keane and Paul Scholes at Manchester United.

Your side on Football Manager 2019 will be no different. Build a strong midfield and success is likely to follow. However, if you're not a side with a huge budget that can be difficult.

But that's why we're here to help. We have scoured the latest edition of the management game and have devised a list of bargains that you can sign for clubs without a significant transfer kitty.

What is a bargain? In the post-Neymar-to-Paris Saint-Germain world that is difficult to say. But none of the players on this list will cost you more than £5.5million. And we think they all offer excellent value for money. 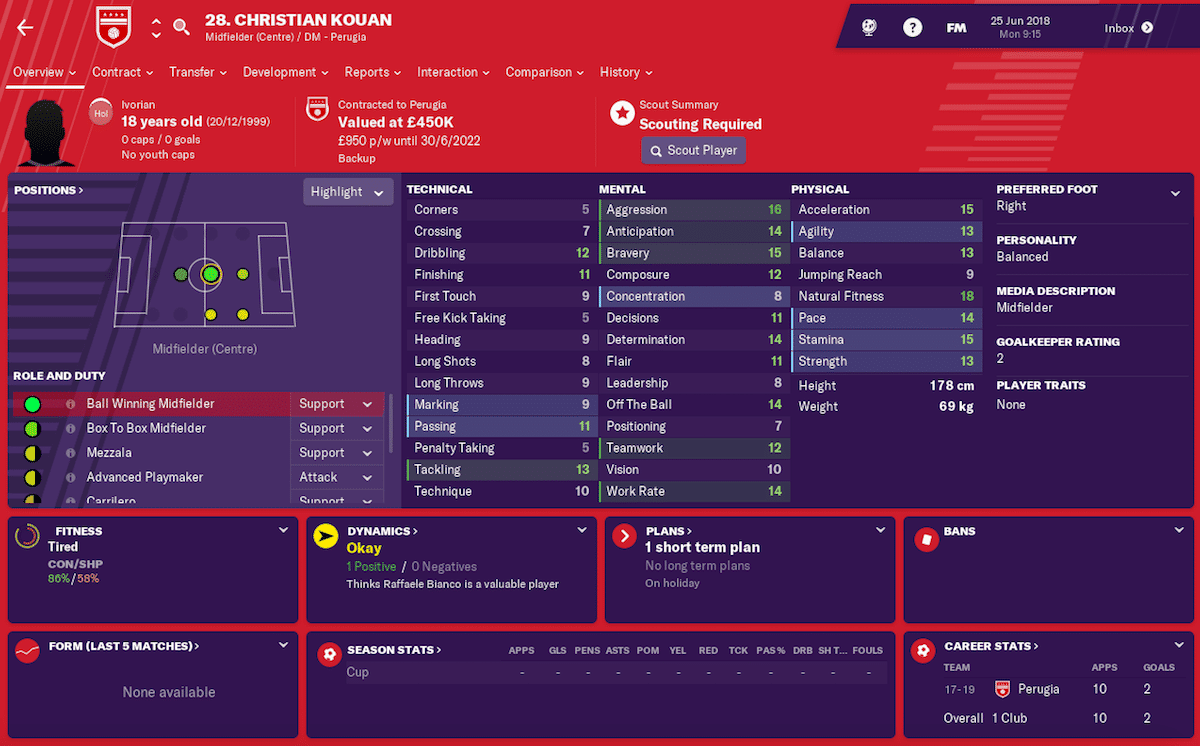 The 18-year-old midfielder can be an excellent pick up at just £1.6million from Itatlian club Perugia.

He will want around £8,000 a week, which most sides in Europe's biggest divisions can afford with little trouble. 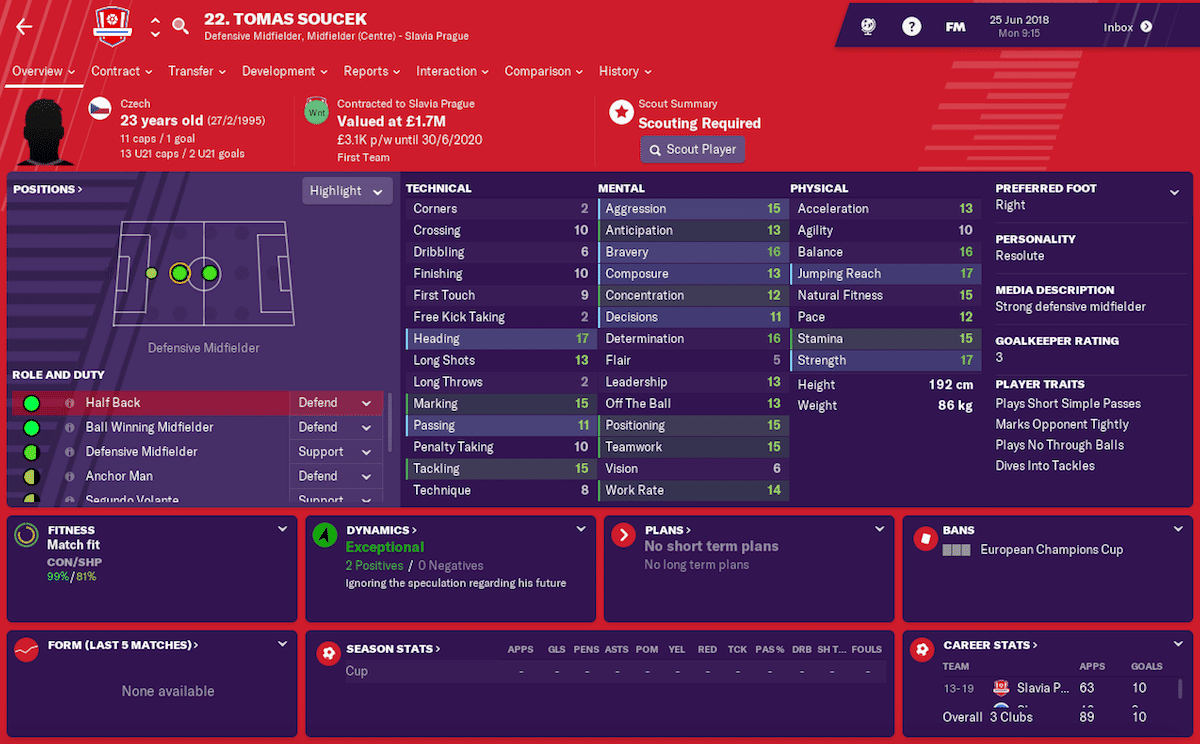 Wanted by big clubs – Manchester City were interested in our save – make your move early for the Czech Republic midfielder.

He will only cost you £3.5million and will want modest wages of around £16,000 a week. Given his ability and room for improvement, he is a bargin signing at that price. 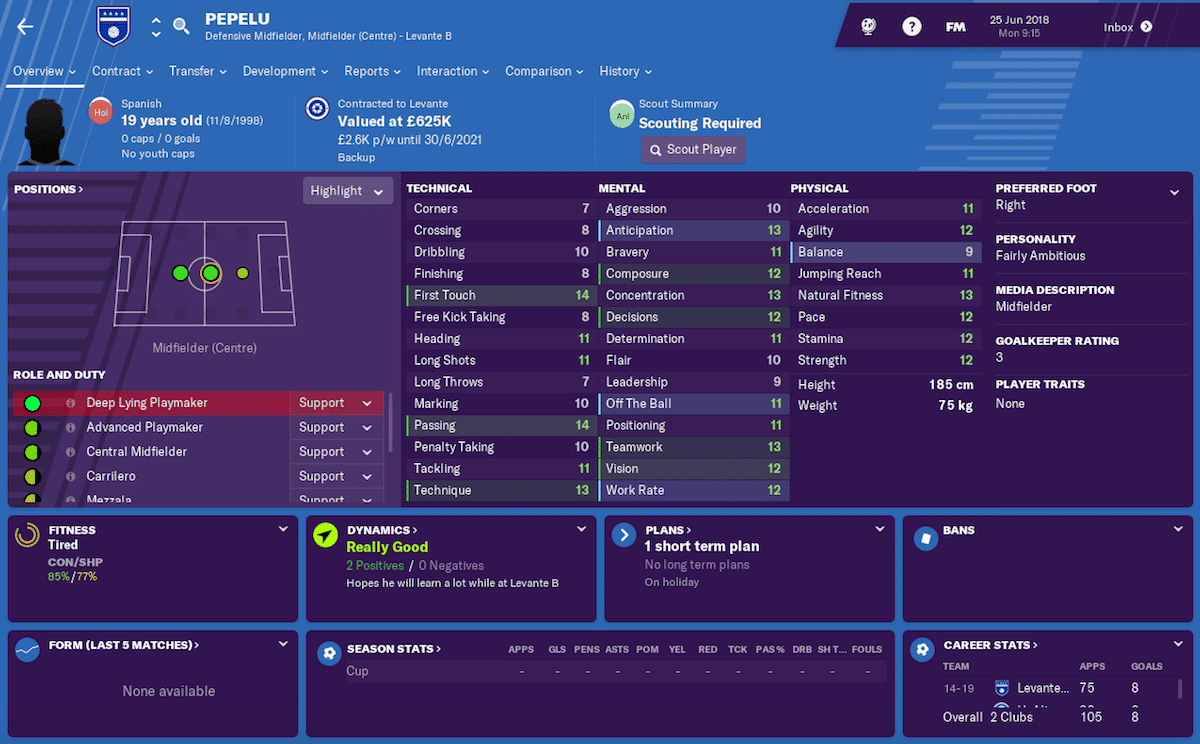 The 19-year-old Spaniard won't be willing to leave Levante, who he only rejoined in the summer, when you load up a new game.

However, wait until January and then make your move for the midfielder. Pepelu will cost around £3million but his value will quickly double and you'll have an excellent young playmaker on your hands. 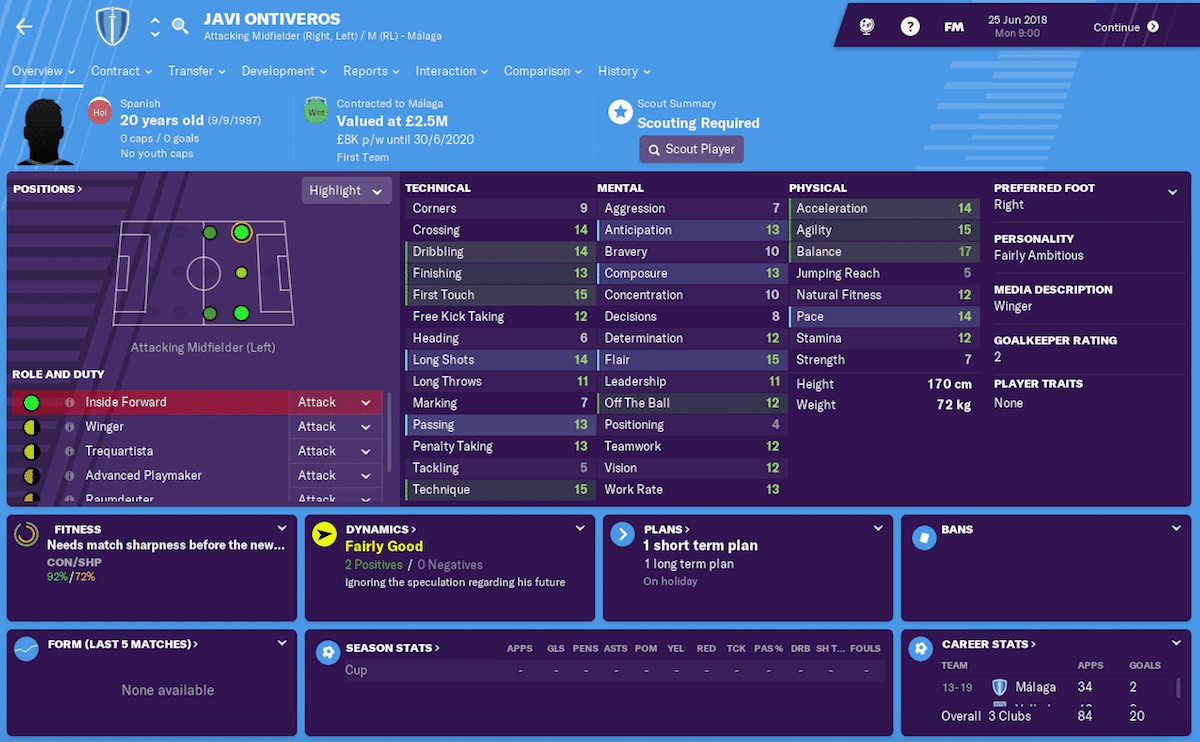 Few countries have produced as much talent as Spain in recent years and Ontiveros is another star in the making. And best of all he will only set you back £4.5millon.

His agent will want a contract of £14,000 a week and for a player of the 20-year-old's quality that is more than worth it. 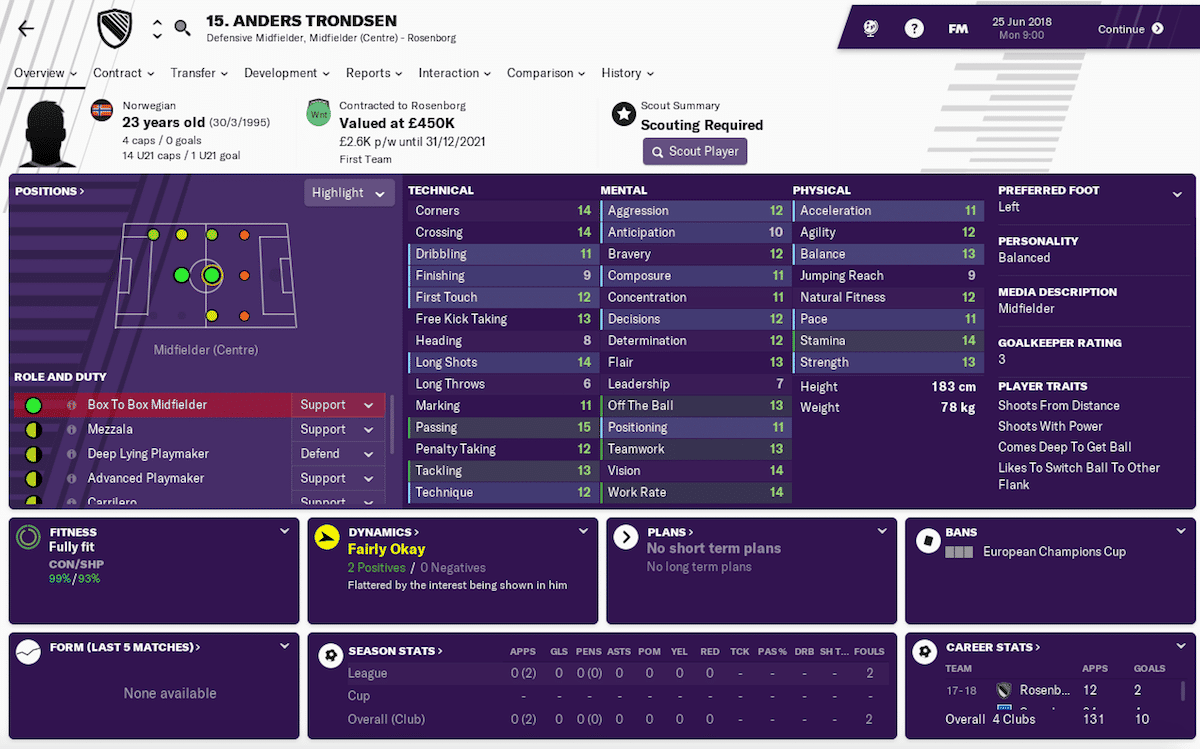 There have been many Scandinavian gems on Football Manager over the years and Trondsen seems the latest.

Available for a modest £3million, Trondsen can be the perfect addition for many top flight sides. He will want a wage of around £13,000 a week, which for the majority of first division clubs is not going to break the bank. 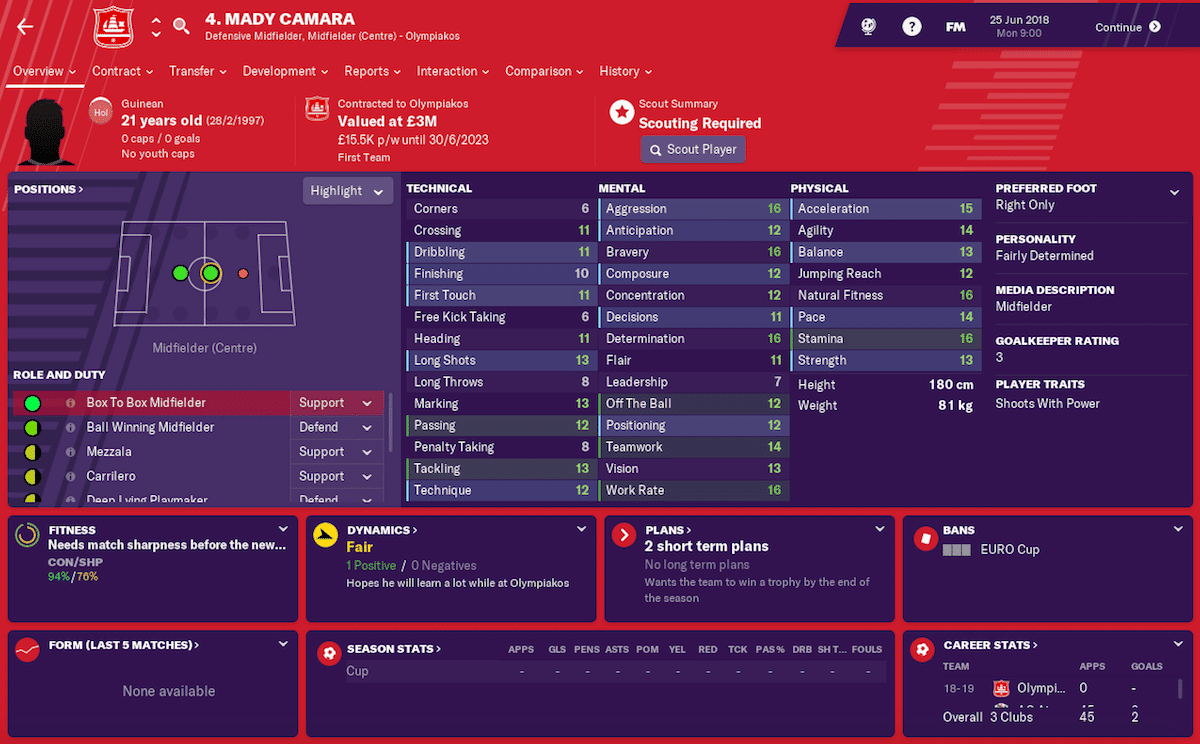 Someone you'll have to play the waiting game to sign yet he will more than be worth it.

Camara has all the attributes required to become a top-level box-to-box midfielder in the mould of Chelsea star N'Golo Kanté.

He will cost you around £5million in the January transfer window but will quickly prove more than worth the fee. A must-have player for any club pushing for Europe or even a superpower who want to bolster their squad. 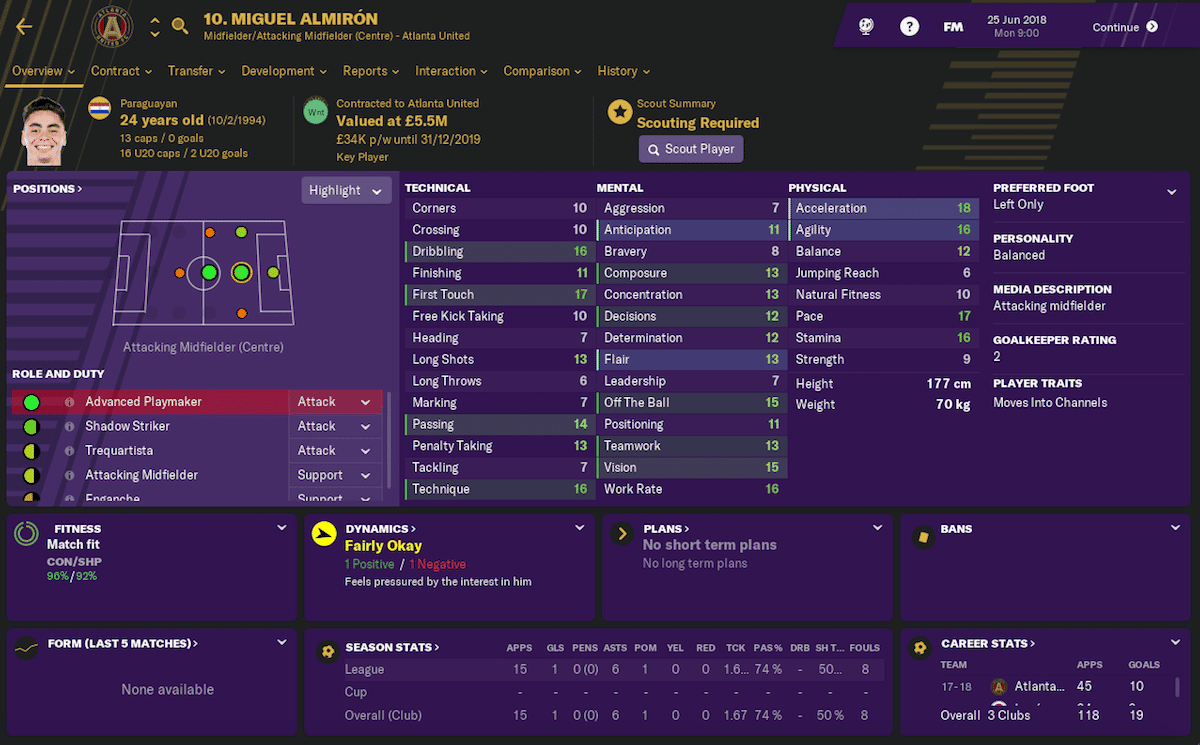 One of the most exciting players in MLS, Almiròn should be near the top of many clubs' shortlists.

Quick, creative and with an eye for goal, the Paraguayan can be an excellent addition for several Premier League sides and those across Europe.

Valued at £5.5million, Atlanta will, slightly strangely, be willing to sell for around £4.9million if you add in a sell-on fee.

He will want around £50,000 a week and, while that is a significant outlay, he will prove worth it. Almirón's value will quickly soar, too, so you could make a quick profit on the attacking midfielder. 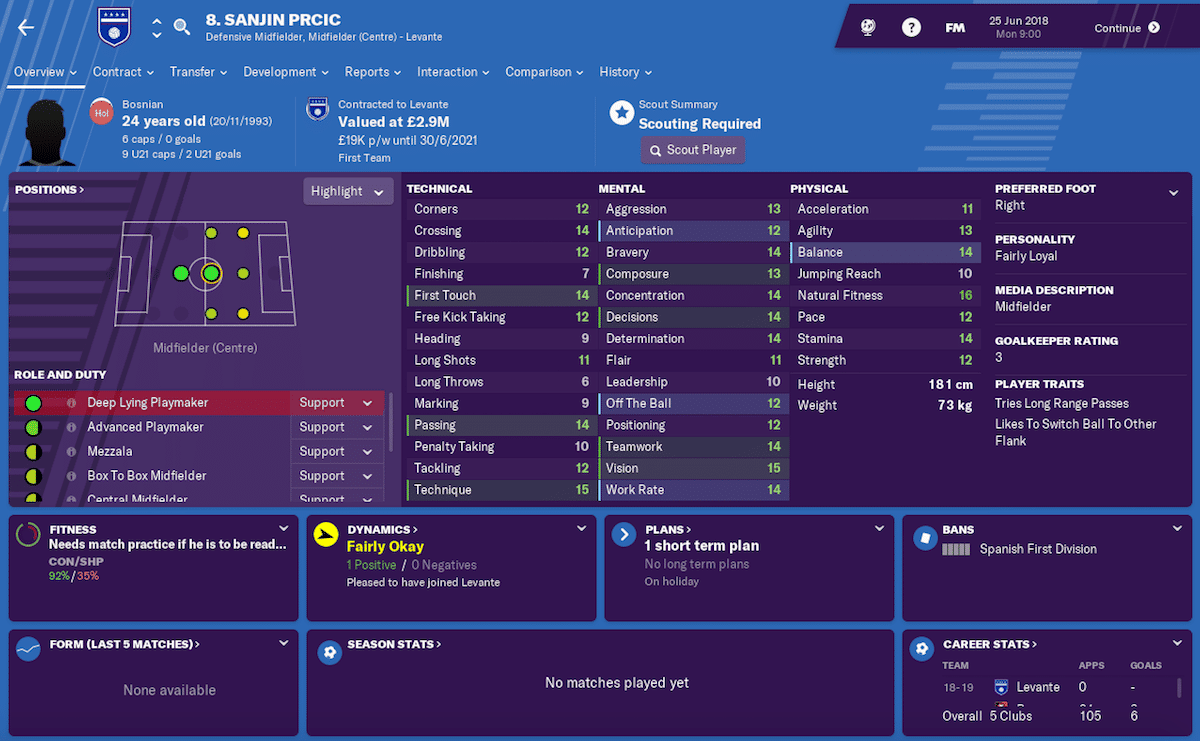 The Bosnian has only just joined Levente so you'll have to wait until January or the following summer to land the midfielder.

However, if you're a side without a huge transfer budget he is certainly worth the wait. The Spanish side are not able to resist offers around the £5million mark and Prcić will quickly prove himself worth double that fee.

He can be an excellent addition and a shrewd investment for a number of clubs outside of Europe's elite. 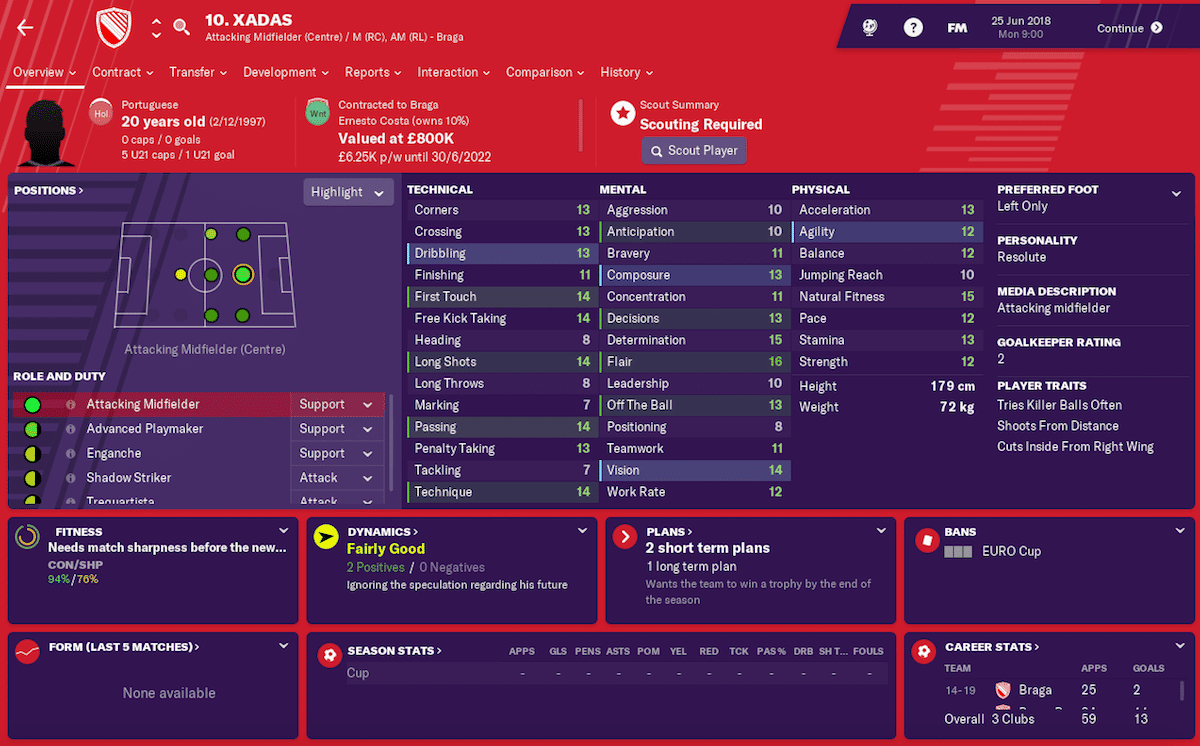 The 20-year-old Portuguese has been a bargain signing for a couple of years now and nothing has changed on Football Manager 2019.

Available for just £1.2million, Xadas can be an effective No.10 for midtable sides in the Premier League or equivalent teams around Europe. He will want only £9,000 a week, too. A real bargain. 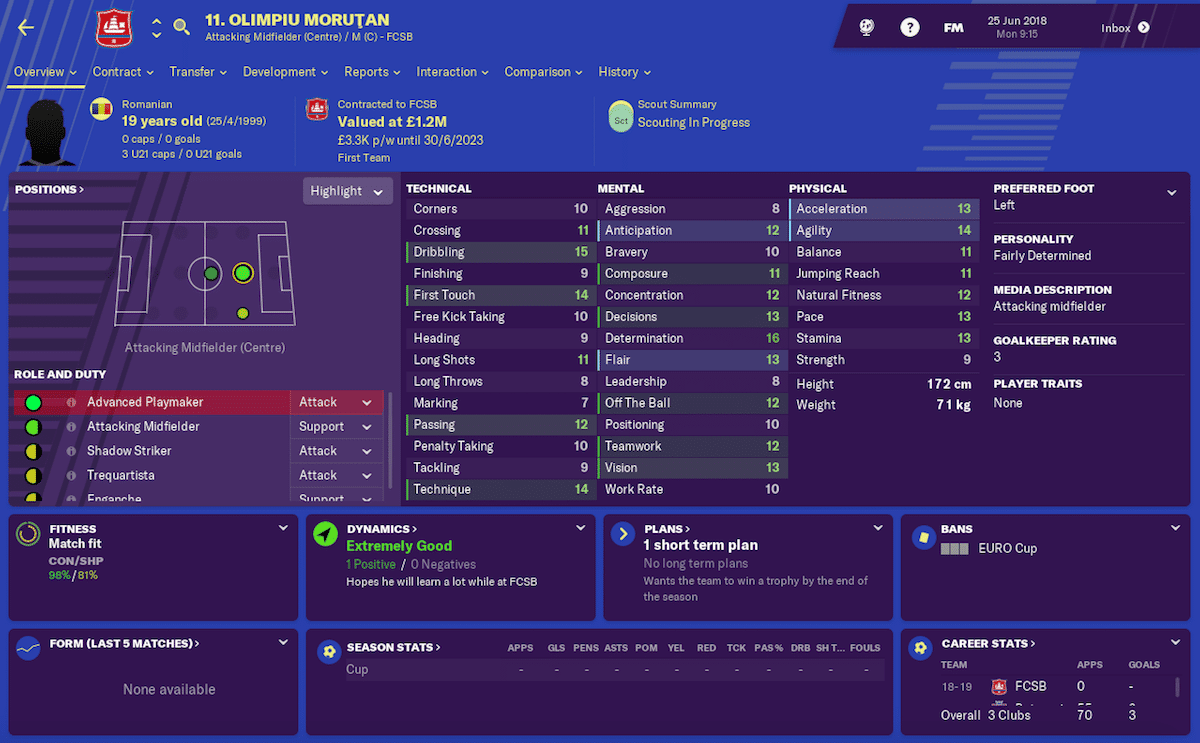 Steaua will accept £2.5million for the attacking midfielder before the 2018/19 season commences but he won't be interested in a move so hold off unttil January.

If you return with a bid of around £3.5million in the winter transfer window you should be able to land your man. However, if you want someone immediately from the Romanian club… 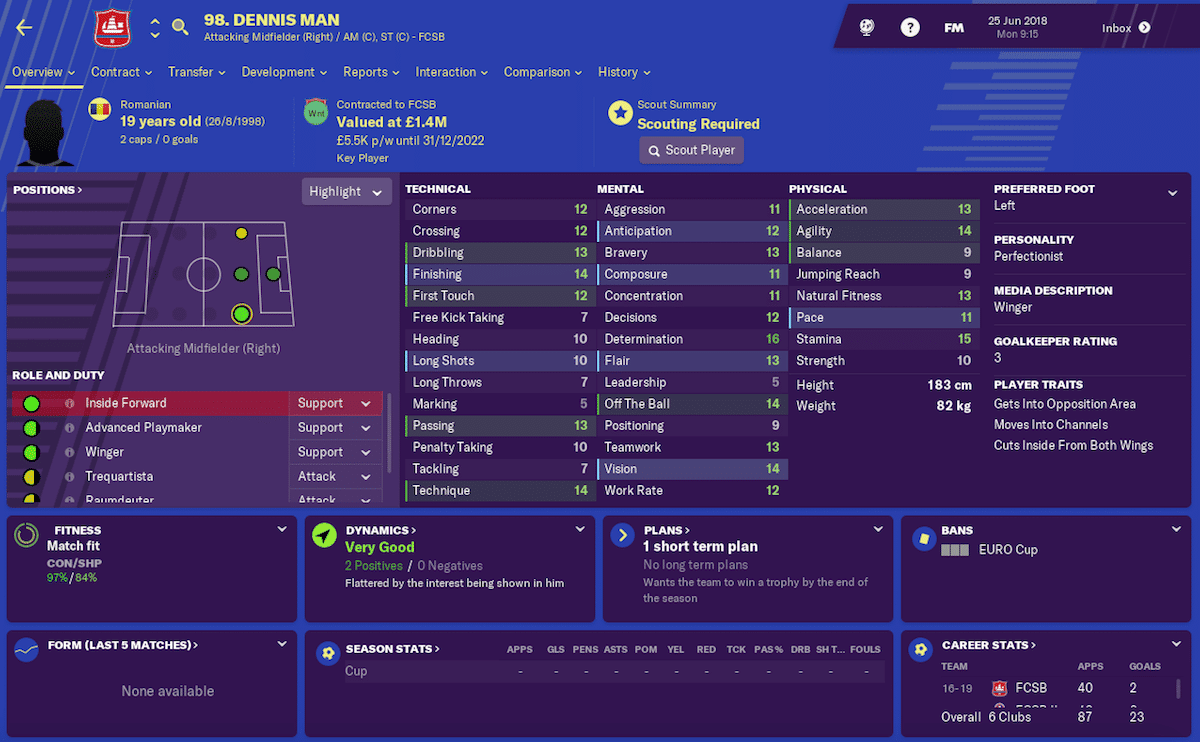 A more pricey £4.5million will be required for Steaua to allow Man to depart but fortunately the player's demands won't be as costly. 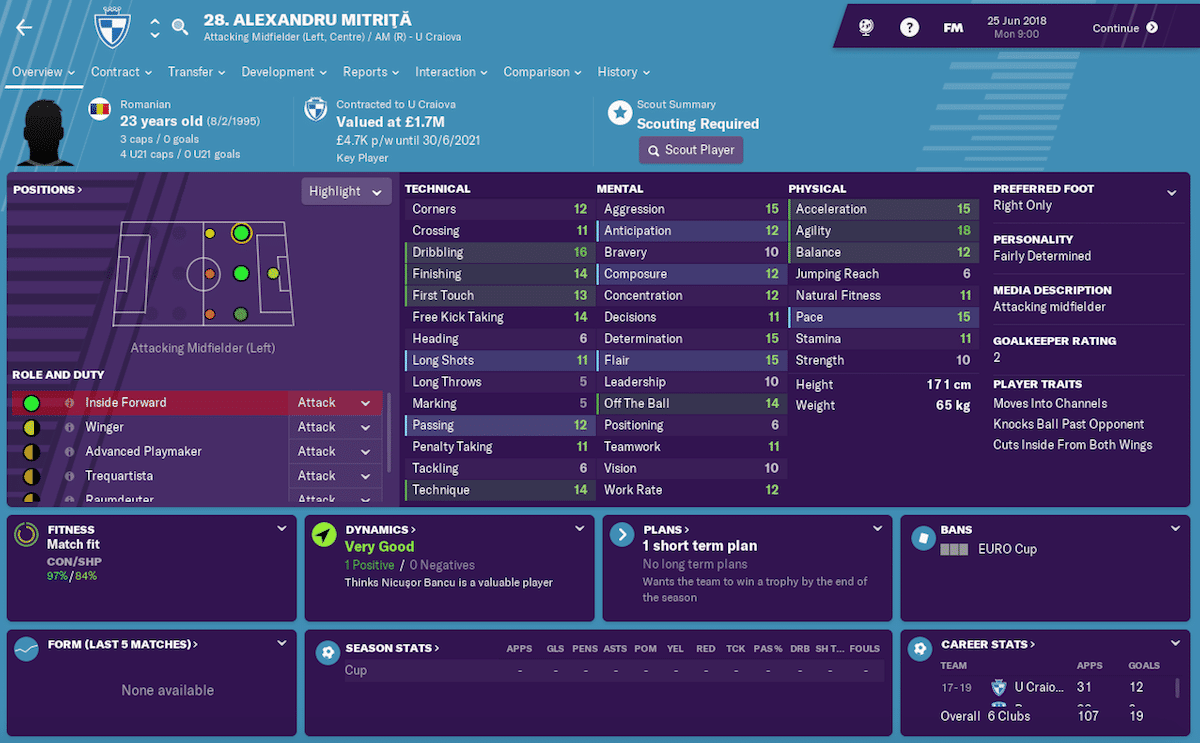 There are several bargains to be had from the Romanian top tier but Mitriță is perhaps the standout.

He will cost only £2.5million and will want £20,000 a week. With a signing bonus and agents fees, the deal could exceed £3million but that is worth it for a winger who can impress across Europe. 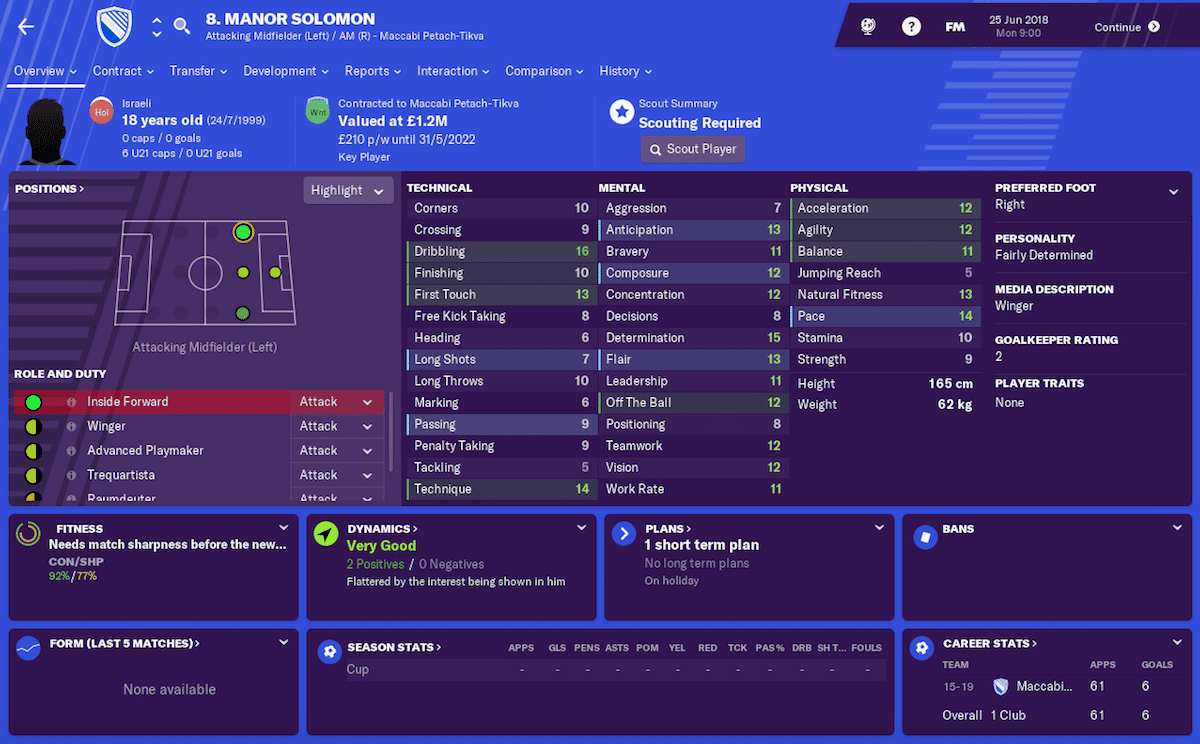 While the majority of the players on this list are ready-made for first-team football, Solomon may need a little time.

He will cost you £2.5million but will only want wages around £8,000 a week. He can be effective for a side in the English Championship, for instance, and will only get better with tutoring and game time.