Monday night's Serie A action pits Champions League hopefuls, Atalanta, against potential relegation battlers, Sampdoria. The odds favour the home side but Sampdoria will be hoping that the extra time they have had to prepare for the game will give them the advantage.

Four of the last seven league meetings between Atalanta and Sampdoria have produced under 2.5 goals and with the home side playing in Europe on Thursday, we're expecting a low-scoring 90-minutes on Monday. Each of Atalanta's last two league games have produced under 2.5 goals, while three of Sampdoria's last four outings in Serie A have witnessed fewer than three goals scored.

Everything you need to know about Atalanta vs Sampdoria

Sampdoria set to struggle on the road yet again

Atalanta took a 2-1 league into the 2nd leg of their Europa League tie against Olympiakos on Thursday. A goal from Maehle 5-minutes before the break put Atalanta into a commanding lead and in the second half as Olympiakos pushed for a goal to get back into the game, Malinovskyi scored twice in the space of 3-minutes to wrap up a 3-0 win on the night. Atalanta progressed 5-1 on aggregate and look like they have what it takes to go all the way and win the Europa League this season.

Sampdoria haven't been in action since they played host to Empoli on the 19th of February. Veteran striker, Quaglierella, scored twice in the first half for the home side but picked up an injury around the hour mark and had to be substituted. Sampdoria held on to win the game 2-0 and as things stand they sit 4pts above the drop zone but could fall two places over the weekend if Spezia and Udinese better their result.

Atalanta: Muriel, Palomino, Ilicic, Zapata and Miranchuk could miss out on Monday night.

Sampdoria: Sensi, Gabbiadini and Damsgaard are all injury concerns for the visitors. 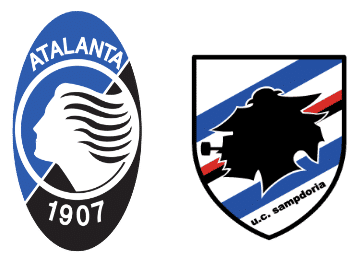