Almeria take on Sevilla at the Power Horse Stadium – Estadio de los Juegos Mediterráneos on Saturday, August 27th. Can Sevilla claim their first victory of the new campaign? Read our free predictions and find the latest odds for the fixture below in our detailed match preview.

Sevilla’s performances at the start of the new La Liga campaign have been awkward at best, though they did manage to put their first point on the board with a draw against Real Valladolid last week. Los Nervionenses should find the going tough at newly-promoted Almeria on Saturday, though they mustered 18 attempts in their last fixture and a first victory should follow if they can maintain those numbers. Their less than sparkling start cannot be ignored however, so backing Sevilla in the draw no bet stakes could be a safer option.

Almeria are still searching for a first clean sheet since their promotion, but to their credit, they did manage to notch in each of their first two assignments of the campaign at the right end. That record is a mirror image of Sevilla’s, who have both scored and conceded in each of their first two matches of the new season. Neither defence looks particularly robust at present and both backlines could be troubled again on Saturday. With that in mind, bettors are advised to back both teams to score.

Top Betting Odds and Stats for Almeria vs Sevilla

View our list of the top stats for Saturday’s contest below alongside a tool to help you choose the best odds.

Read all of the latest injury updates and team news for Saturday’s La Liga meeting between Almeria and Sevilla below.

Almeria have a clean bill of health ahead of Saturday's game in terms of injuries. Alex Cantelles was sent off at Elche last time out, however, and he will miss this weekend's match through suspension. Almeria still managed to draw that contest 1-1.

Suso is out for Sevilla and will miss the next few weeks, while Jesus Manuel Corona will be out until December with a ligament injury. Marcos Acuna was handed his marching orders against Real Valladolid last week and the defender is suspended this weekend as a result. 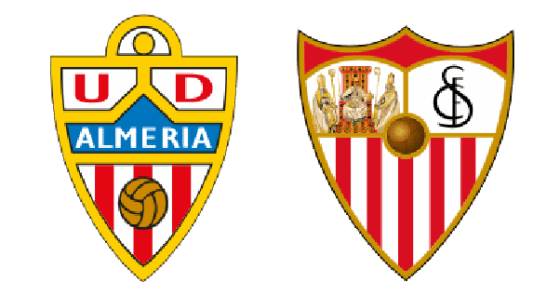 The bookmakers have priced Sevilla as their favourite to win on Saturday.

Who is Sevilla’s captain this season?