A central duo is often lauded with much of the praise when it comes to the subtle art of defending, and it’s easy to forget that defending is usually a team effort, that should ideally start with the attackers.

It’s nye on impossible to carry a poor defender in the modern game – you will doubt doubt have an exception or two to that rule at your own club! – and some of the best make a real difference to their side. When you have a great back four, it can take a team to the next level.

The ever-changing laws, to ‘favour the attacker', and extensive camera angles has meant that the dark arts of defending have required refinement over the last few decades. Therefore, we are going to focus on the back fours of the past two decades that were able to compete even with the cameras watching their every move.

This four/five men have won trophies continuously under a succession of different managers, as the Spanish giants revolutionised the modern game during the early part of the 21st Century.

It’s true that the team smothered their opposition with constant pressure that came from the two waves that lay in front of the back four, but there’s no denying that this defence were one of the best units in the world at the time in their own right. 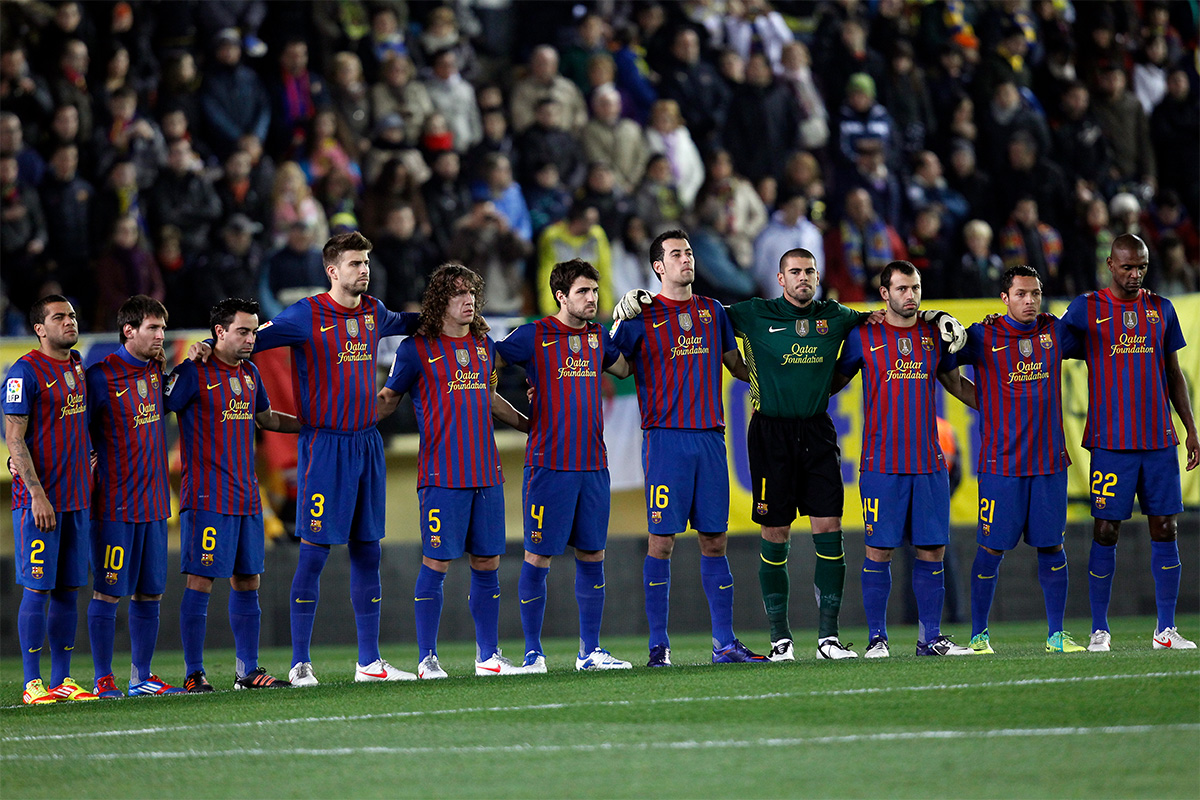 From Gerard Pique to Dani Alves, each had no rival when it came to their position, and they were coveted across the globe.

They won it all in style, and the defence was sometimes forgotten as the focus inevitably shifted to Lionel Messi and co. Both Abidal and Puyol have since retired from the game, while Alves left for Juventus during the recent transfer window.

Barcelona will keep on winning, that much is for sure, but Enrique will have to rely on a new wave of defensive recruits, such as summer signings Samuel Umtiti and Lucas Digne, to keep the Tiki-Taka ticking at the back.

During his first incarnation as Chelsea boss, Jose Mourinho changed the face of English football. His team was built on a solid defensive base that cost more than many of the teams they were competing with for the Premier League title.

They romped home to a first league win in 50 years in 2005, finishing 12 points ahead of second-placed Arsenal. Most of the other clubs on this list had experienced success in the recent past, but the Blues' team of the ‘mid-noughties' paved the way for a new chapter of success at Stamford Bridge. 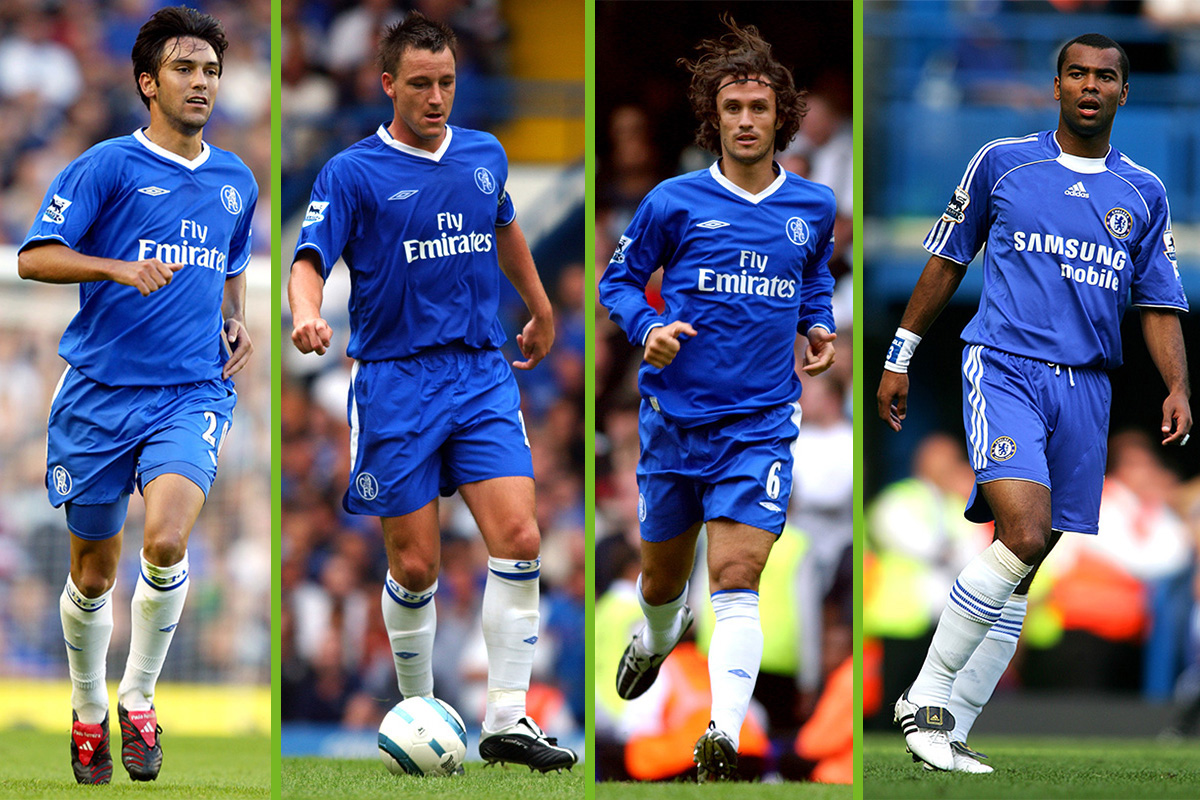 John Terry and Ricardo Carvalho get most of the plaudits, but Ashley Cole was rated as ‘one of the best left-backs in the world’ for nearly a decade, and defensively astute full-back Paulo Ferreira completed the quartet.

Petr Cech should also get an honourable mention, as he quickly established himself as one of the best goalkeepers in the league, but he was consistently protected by one of the strongest buffers found in Europe at the time.

They may not have won it all, but they helped to change expectations at the Bridge. Terry is, of course, the last man standing, and it’ll be the end of an era when he leaves West London.

Three successive Eredivisie titles and a European Cup – the Ajax team of 1994 to 1996 was in a class of its own. That fabled side will live long into the memory, and they did it all with three at the back (but still merit a place in any back fours' all-time list)!

Danny Blind played as a sweeper, picking up stray balls and redistributing as necessary, while the ‘fourth man' Frank Rijkaard operated in the hole just in front of the defence, dropping back when required to provide additional support. 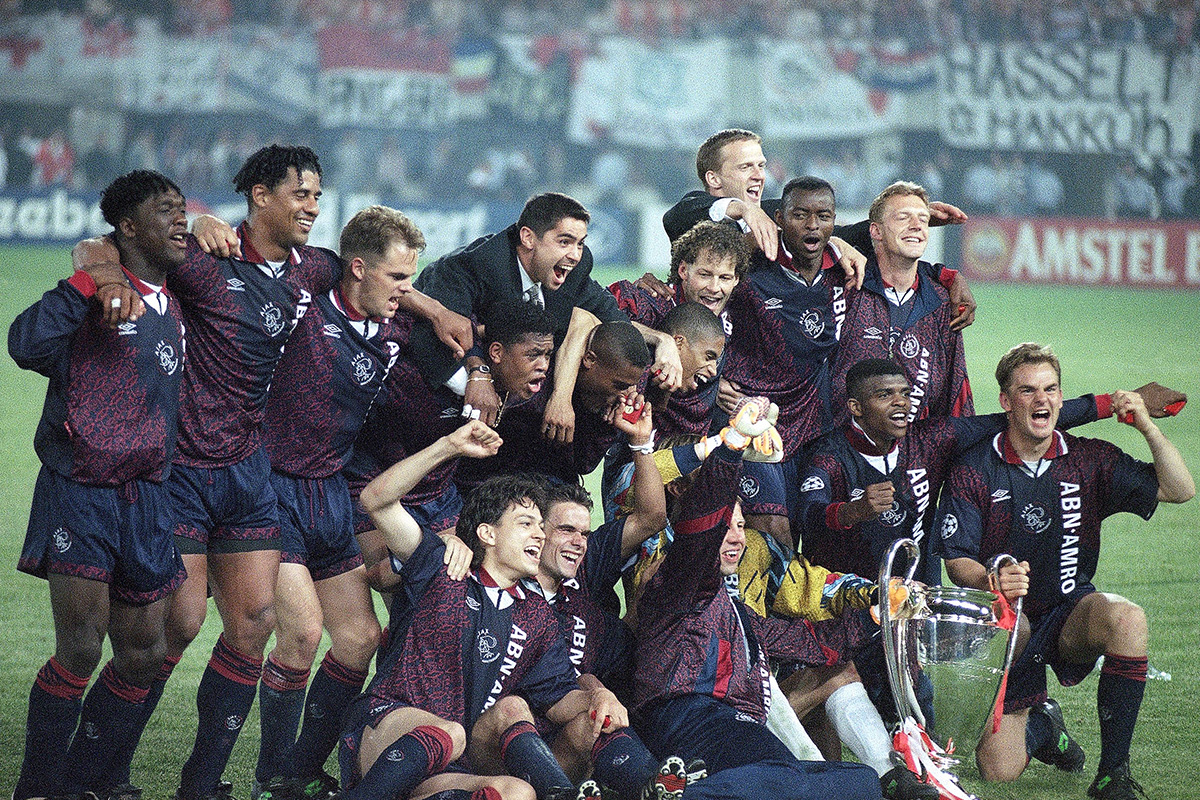 The two centre-backs would pick up an attacker each, with Blind offering back-up, just in case. It was a gutsy system for Louis van Gaal to play – how Manchester United fans longed for such cavalier spirit lasts season – and required a certain level of intelligence to ensure the back line is not overwhelmed or dragged out of position.

Technical competence was a major reason why they were able to operate a man short, as playing in the ‘Ajax way' is the most important thing for the team. It’s their philosophy, and it served them well while they had one of the most talented squads in Europe.

No, not the Invincibles. Instead, we’re focusing on an earlier version of the Arsenal back line, harking back to a time when the names on the team-sheet would send shudders down the spine of visiting strikers.

George Graham sculpted a 4-4-2 that was hard to beat. The terrace chants of ‘Boring, boring Arsenal’ and ‘1-0 to the Arsenal' are as famous as the arms aloft offside call from the early nineties at Highbury. 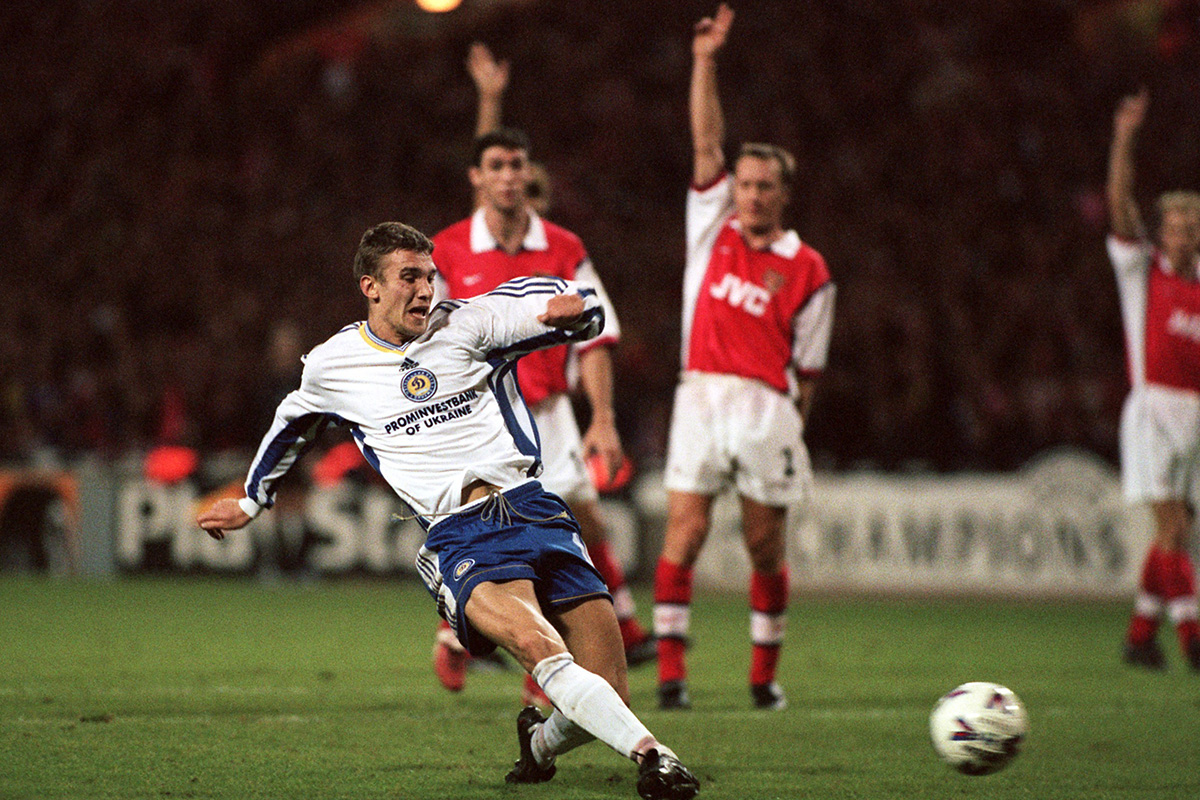 The Gunners had not won a title for over a decade when they finally snatched it back in 1988/89, and further title wins in 1991 and 1998 further consolidated their spot as the top four side we know today.

The ‘famous four' – or six, including Martin Keown and goalkeeper David Seaman – all spent the majority of their careers at Arsenal, and are remembered as one of the most finely tuned units of all time. Their market value today would be astronomical – and they would all be welcome back into an Arsenal side crying out for more leadership at the back.

Arsene Wenger also had the opportunity to enjoy the players' twilight years at Highbury, although he should be commended for reinvigorating the side with new signings as the team went on to reach even greater heights, including their historic 49-game unbeaten run.

As legendary defences go, you can’t get much better than the Milan side led by Paolo Maldini and Franco Baresi. As part of, perhaps, the greatest European club side of all time, the pair helped to lead the Milanese giants to repeated success both in Europe and domestically over different decades.

Milan under Fabio Capello and Arrigo Sacchi were more tactically astute even than the ‘total football' Ajax side of the 90s, while their mastering of the offside rules could be matched only by the famous Arsenal back four in years to come. 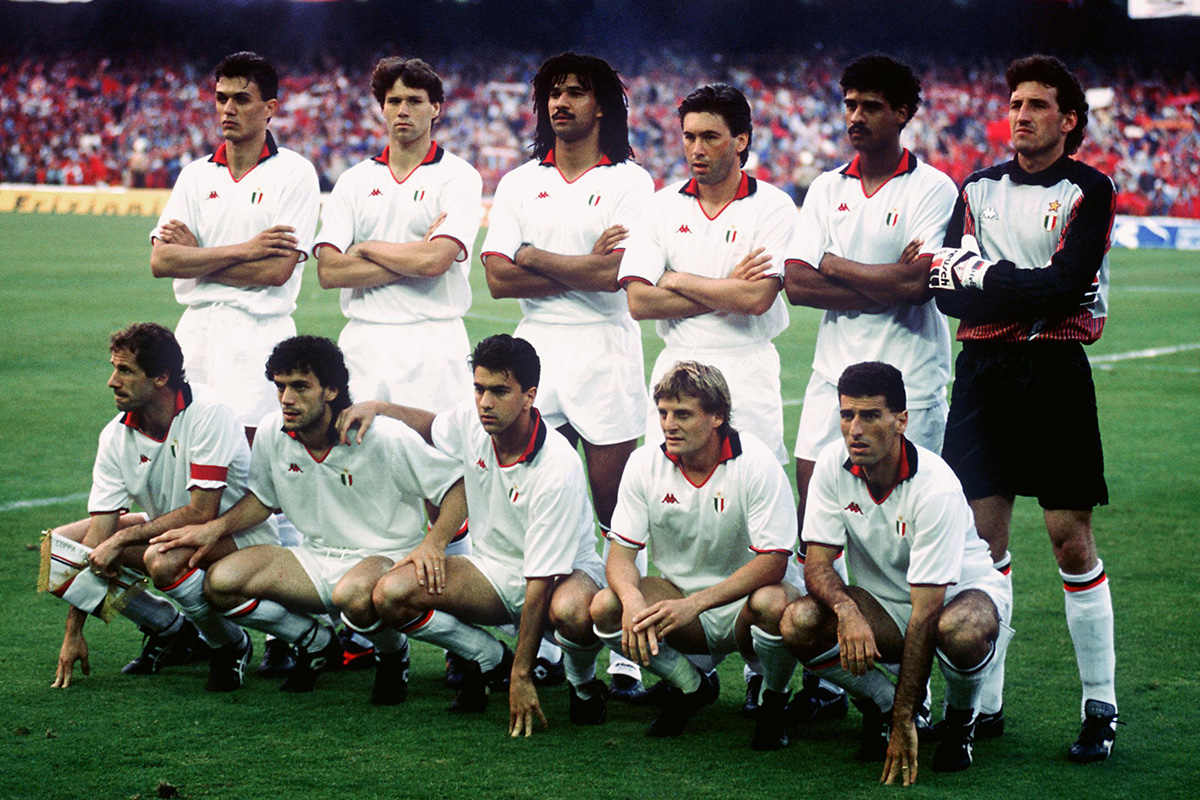 These players are partly the reason why we think that central defenders' careers can last longer than most players on the park – both Maldini and Costacurta played into their 40’s.

As with Barca, they had no equals, either individually or as a unit. Maldini and Baresi are well remembered as the respective leaders of the side over the years, and they won a trio of European Cups together during the overlap of their time spent at the club.