France has not only developed some of the greatest footballers to grace the beautiful game, but on the touchline, their coaches have shaped today’s game.

Creating a list of the men deemed to be the greatest French managers is as tough as putting your kids in an order of preference. There are some obvious choices, but whether it be due to their influence on the game, success at some of the best clubs or just the respect they command, narrowing down the list is not easy.

Zinedine Zidane has already won the Champions League and has pushed Real Madrid to the top of La Liga once again, but still in the early stages of his career, he just misses out.

The same fate meets Jocelyn Gourvennec, Hervé Renard, Rémi Garde and many more. They will all have chance to continue their journey, making this list even harder in the future. 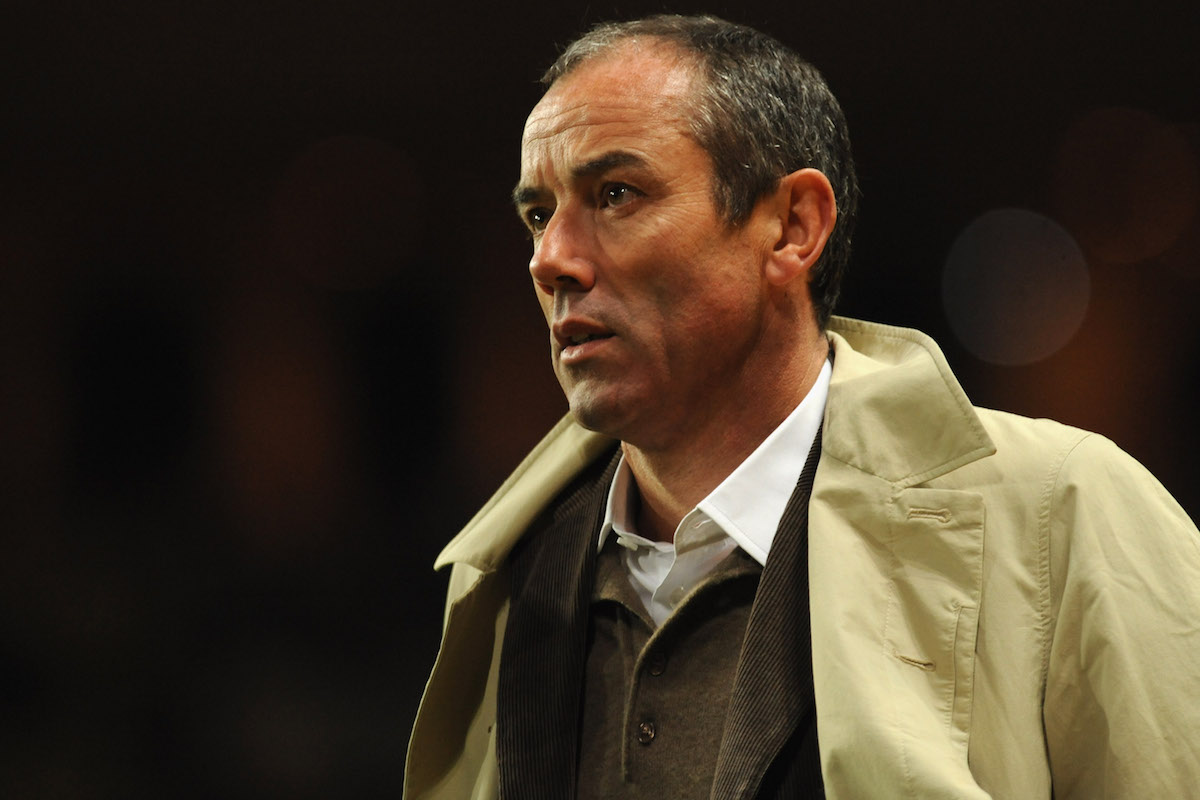 A little controversial choice to kick things off, but you could argue his merits for hours. Once he left France in 2005, things turned a little sour.

A poor start at Rangers, winning just two of 10 games, makes him one of the worst coaches in Old Firm history. However, this is a man that won three-straight league titles with Olympique Lyonnais. He took over from Jacques Santini won the first of OL’s seven titles and steered the club in a brand-new direction. Gerard Houllier and Alain Perrin would also enjoy success in Lyon, but you can argue that they benefited from the foundations that Le Guen built.

He would take over Paris Saint-Germain in the worst term in their history, but stopped them from being relegated and then helped them win the Coupe de la Ligue in 2008.

Not an instantly recognisable name on the list, but Albert Batteux is the most successful coach in the history of French domestic football. As a player, the midfielder helped Stade de Reims win the title in 1949, but his greatest success would come as he transitions into a manager.

At just 29 years old, the players were unconvinced of his credentials, but by winning the league with the Champagne side in 1953 and 1955, he some silence any doubters. Batteux then took them into Europe and twice reach the final of the European Cup – only to meet the imperious Real Madrid in the final both times. Three more league crowns would follow.

Not to be classed as a one-club-man, he would then kick off Saint-Etienne’s successful spell in the 70’s, helping Les Verts to four league titles in ’67, ’68, ’69 and ’70 – he also won two Coupe de France trophies.

France Football named his as one of the best coaches of the 20th century and in 2008, Stade de Reims named a stand after him.

As a player, Michel Hidalgo won the French Division 1 twice. He never lifted the league crown as a manager, but after taking over as manager of the France national team in 1976, he was instrumental in helping rebuild the fortune of Les Bleus.

In 1982, with a team spearheaded by Michel Platini and Dominique Rocheteau, Hidalgo helped France finish fourth in 1982, after failing to qualify for the tournament for 12 years – only losing to Germany on penalties. The Normand-native would get his moment two years’ later as he guided the hosts all the way to European Championship glory.

Successful as a player, he was part of the magnificent midfield that helped France win the 1984 European Championships under Hidalgo. Then, Luiz Fernandez went into management. He turned AS Cannes into a European team before heading to the bright lights of Paris. Although he never won the league, he did pick up two domestic trophies and became a bit of a cup expert. In 1996 he guided the club to the Cup Winners’ Cup, becoming the first French manager to win a European trophy.

Laurent Blanc won more at PSG than Fernández, but with more support and in a much stronger position, The Spanish-born coach would return in 2000 for a second-term and was instrumental in bringing Ronaldinho to Europe. Fernández should be on this list for that reason alone.

Now, the coach is more famous for being part of talk radio channel, RMC and his program, Luis Attaque.

When looking at the greatest ever French managers, you have to look at the men behind the most successful club sides. With eight Ligue 1 titles, FC Nantes deserve their place in French football history and the 1994-95 team will never be forgotten.

In charge of that team was Jean-Claude “Coco” Suaudeau. It was his second spell at the club he won two titles with as a player and he was looking to emulate his 1983 success as coach. Suaudeau would go one better. Not only did they lift the title, but they went 32 games unbeaten during a single season, a record still to be beaten. Players such as Claude Makélélé, Christian Karembeu, Patrice Loko and Reynald Pedros starred in that side, but it will always be the team that Coco built.

José Arribas won three titles with Les Canaris and Jean Vincent won two, but it was in the way Suaudeau was victorious that puts him ahead of the others.

One mistake that OGC Nice might always regret is rejecting Robert Herbin as a youngster. The utility player was snapped up by Saint-Étienne in 1957, and the rest they say, is history.

As a player, he won five league titles and three Coupe de France trophies. Not bad, then within four years of his last cup as a player, he won three straight league titles as a coach. Thrown in the Coupe de France in three out of four years, a spot in the Champions League final against Bayern Munich and another league crown in 1981 and you have one of the most decorate men in French football history.

Blending youth with stars such as Michel Platini and Dominique Rocheteau, the red-haired coach had an amazing 11-year spell at the Stade Geoffroy-Guichard, until he left for bitter rivals Lyon in 1983. Karma struck though, and he couldn’t save them from relegation.

He also remains the only coach in modern football to score a goal. At the end of the 1974-75 campaign, after his 36th birthday, and with Sainté already crowned champions, he played at full-back and scored from the spot in a win over Troyes. 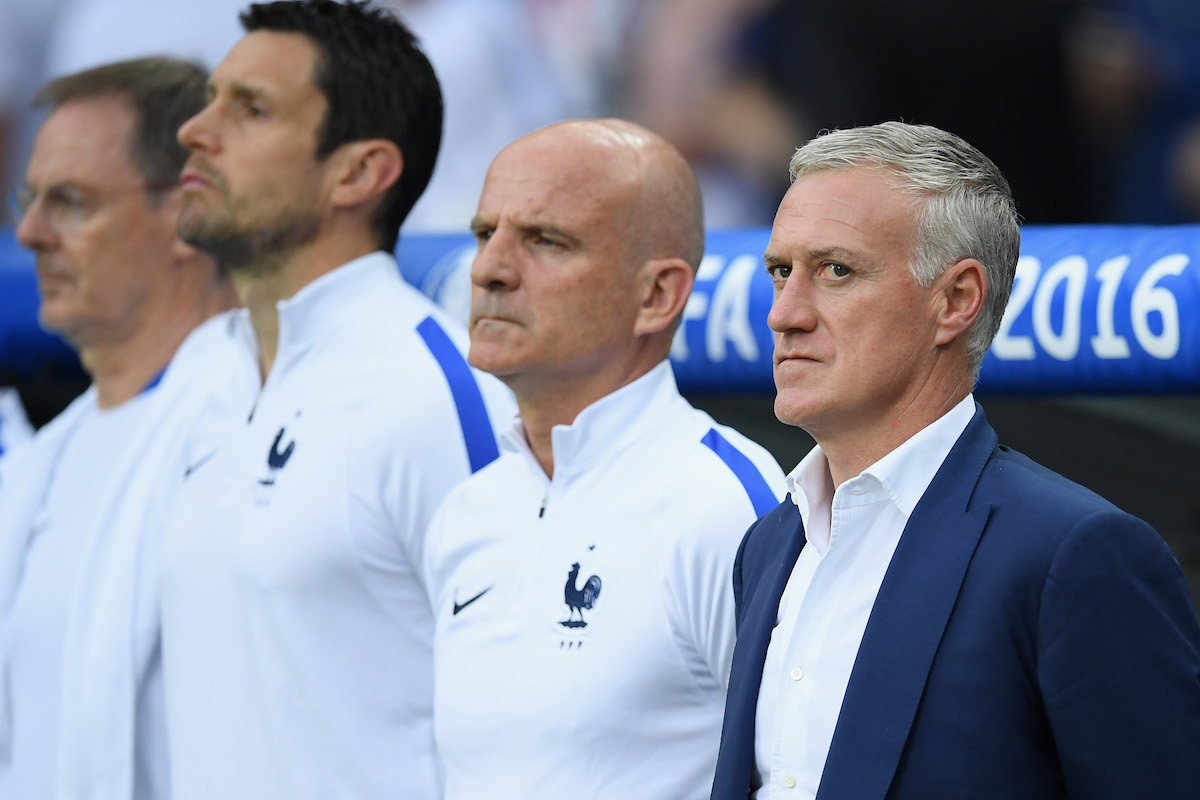 The famous water-carrier of the French national team. His career might not get better than lifting the World Cup on home soil in 1998, but through his managerial exploits, he’s definitely trying.

With AS Monaco, he won the Coupe de la Ligue in 2003 and then with an excellent team, consisting of Jérôme Rothen, Ludovic Giuly and Fernando Morientes, he took them all the way to the Champions League final. Only to be beaten 3-1 by Jose Mourinho’s FC Porto.

Juventus fans will always remember fondly for guiding them out of Serie B in 2007, but it was back in his home country that he really developed. Before PSG’s dominance, he helped Marseille win Ligue 1 in 2010, then three straight Coupe de la Ligue crowns.

His biggest success has come with the national team as Deschamps had to rebuild the team after Raymond Domenech and Laurent Blanc.

Harmony, no drama and a blend of youth an experience. The first signs of progress were seen in Brazil, but after falling at the final hurdle during Euro2016, France showed they were finally free of the ghosts of 2010. 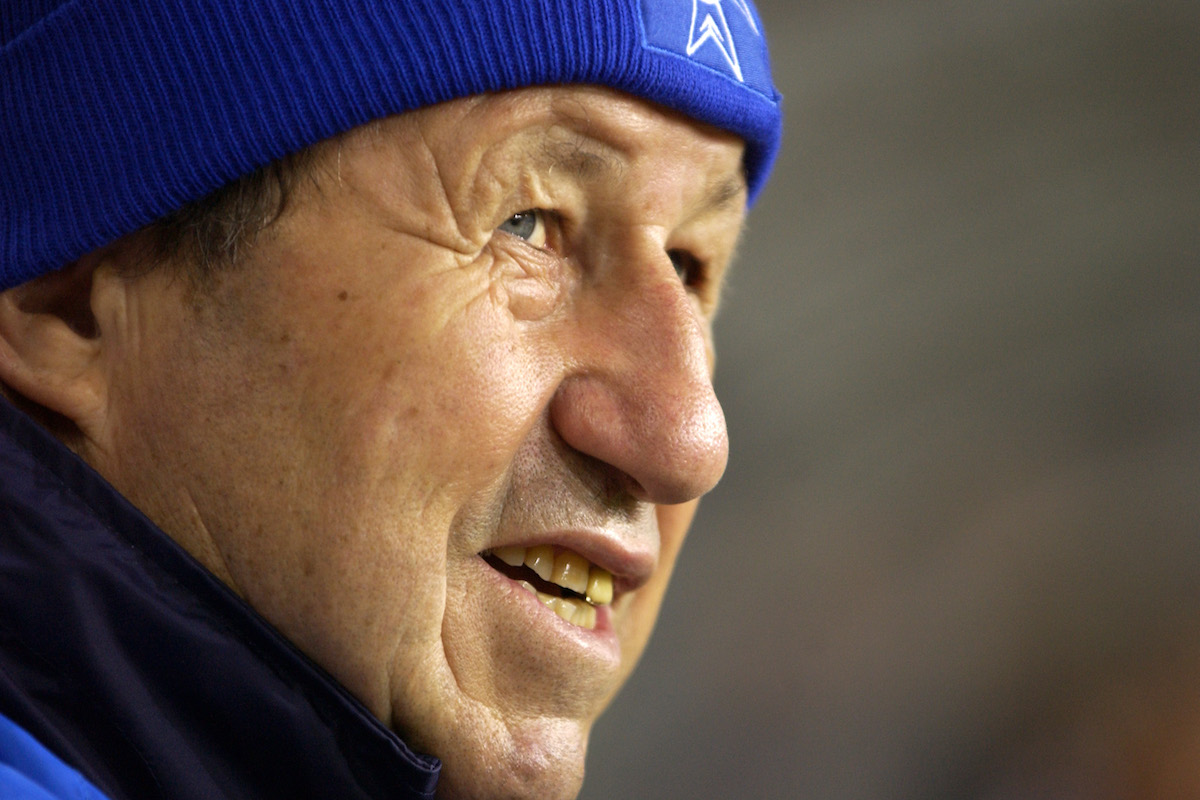 Success is not always measured in trophies and gold, sometimes it’s more important to look at what someone has achieved, what they brought to the game and how they changed it. That is why Guy Roux is still one of the most respected coaches in France.

In what was actually his second of three spells at the AJ Auxerre, he would remain part of the club for an unprecedented 44 years, from 1961 to 2005. His introduction to the club was as bizarre as they come. He arrived at the club in 1961 to play in a friendly against Crewe Alexandra. With the English side struggling with injuries, they were looking for a translator to ask Auxerre to loan them some players. Roux stepped in, played against the French side and President Jean Garnault offered to sign him up. Roux wanted to be player/coach but Garnault was reluctant due to his lack of experience.

The future coach would lay out a six-page letter of his ideas of how to run the club and manage the team, eventually they accept due to the fact he is the cheapest option available. He returned from military service in 1964 and 32 years later, Auxerre would win their only Ligue 1 crown.

Roux would continually develop talent at the Burgundy club. His influence could been seen in France’s 1998 World Cup and throughout all the coaches that have crossed his path. French football would not be the same with Monsieur Roux 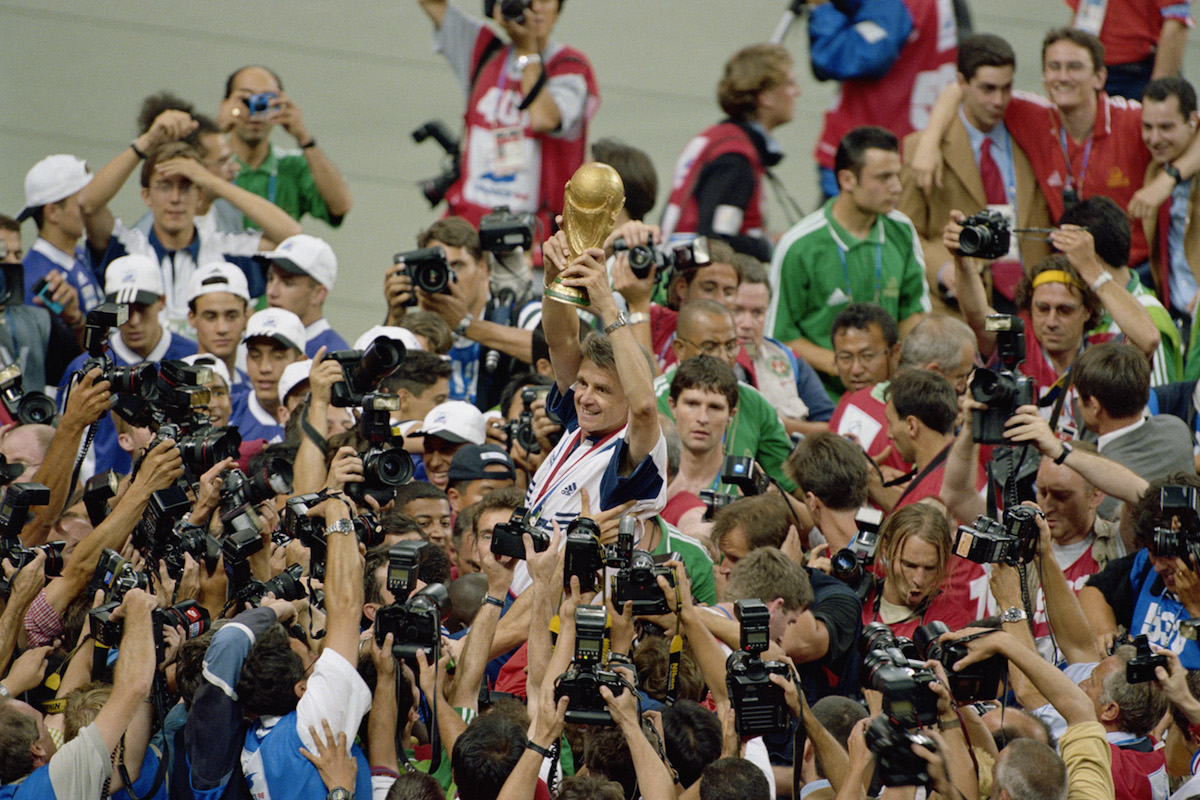 A successful club manager in his own right – he won the Coupe de France twice and three league titles with Bordeaux in the 1980s, however, it was his appointment as Director of the National Technical Training Centre in 1991 than would begin his path to greatness.

A year later he was appointed as Gérard Houllier’s assistant for the national team. Failure to reach the ’94 World Cup saw Jacquet named provisional manager.

Reaching the semi-finals of Euro ’96 lay the foundations for what would come two years later.

It nearly all went downhill the year before the tournament. Third place at Le Tournoi had the fans calling for his resignation and the press continually labelled him as incompetent.

France may not have been flamboyant or eye-catching, but they were well-organised and disciplined. The perfect blend of youth and experience in the squad, he knew that defence was their strength and let them lead from the back, it was a masterstroke in knowing what makes your squad tick. Tactical astuteness from Jacquet saw them expose Brazil and set-pieces, and the rest, as they say, is history. 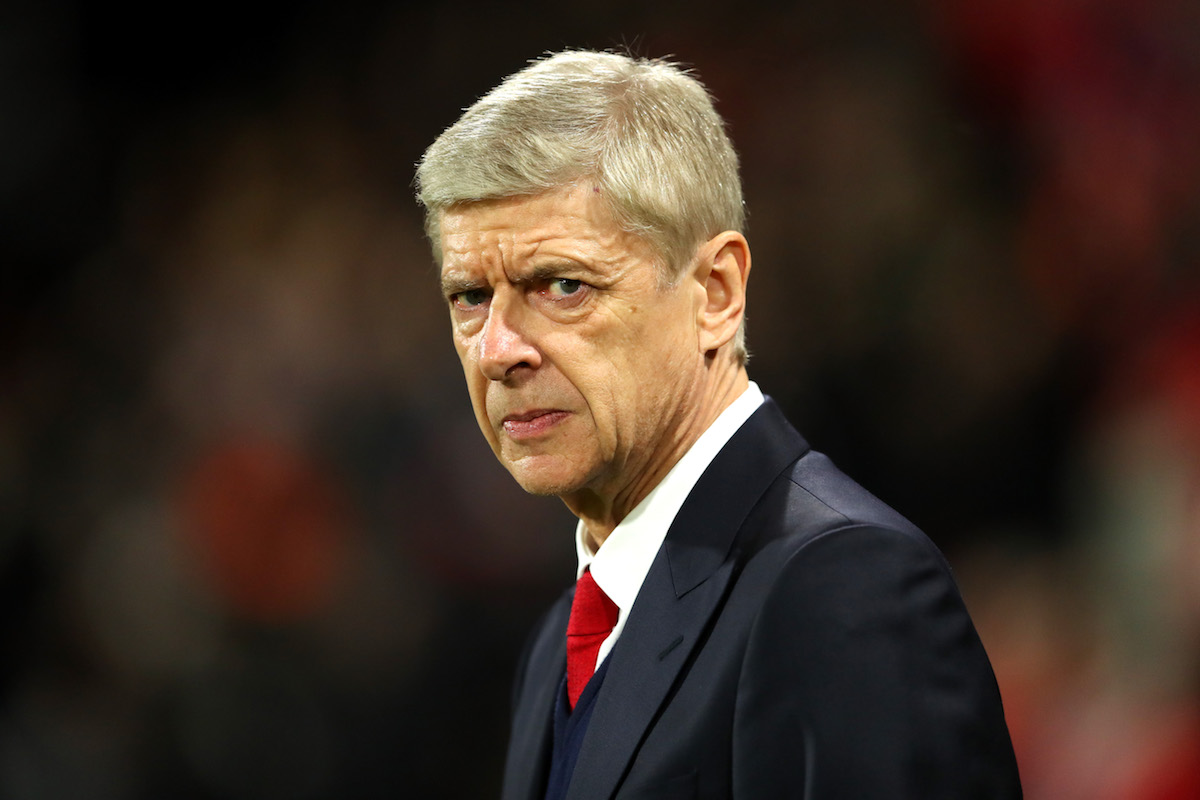 Regardless of how his story at Arsenal ends, Arsène Wenger’s place at the top table of football management should never be belittled of forgotten.

Arriving from Japan, no one gave the French boss a chance of success. However, Le Professor, changed modern football for the better. He signed players he believed in, got the best out of what was there when he arrived at Highbury and he also turned Arsenal into a professional team that looked nothing like teams of that era knew existed.

His influence is why players are healthier and fitter. Wenger changed the way Arsenal trained, his immense attention to detail. He transformed the way his players ate and trained and this filtered down through the leagues. Watching the likes of Tony Adams, Martin Keown and Lee Dixon extend their careers, convinced other managers they needed to do the same.

As a man-manager, they are not many better. Thierry Henry and Robin van Persie just two of his many success stories.

The only issue with Wenger is, he changed the game 20 years ago. Now, the modern game seems to have somewhat passed him buy. Money in the game has changed, teams have caught up in the technical and analytical preparation, and, although not the view of everyone, he’s lost some of the fans.

It may be time for the Frenchman to move on, let someone else pick up the baton, but no one manager has had more influence on the modern game then Strasbourg’s most famous son.