West Brom have remained competitive despite having their relegation confirmed and we're expecting the Baggies to give West Ham another tough test on Wednesday. The Hammers arrive knowing that only a win will do if they want to continue their push for the European places, but they have only secured 1pt from their last two matches.

Read on for our full match preview and prediction for West Brom vs West Ham in the Premier League.

Our Top Tips for West Brom vs West Ham

West Ham have won two of their last three games against West Brom, claiming a 2-1 win when the two sides locked horns for their reverse league fixture in January. West Brom have lost three of their last five league games while West Ham have secured 4pts from their last two away trips, so you can see why we're backing the visitors to win.

Both teams have scored in four of the last six meetings between these two clubs. Each of West Brom's last four outings and four of West Ham's last six fixtures have also ended with both teams getting on the scoreboard, and we're expecting more of the same in what should be a close and competitive 90-minutes on Wednesday.

West ham's last two wins against West Brom have been by two goals to one and we're predicting another close scoreline between the pair this Wednesday. The Baggies lost at home in their last game 2-1 to Liverpool and West Ham's last away win against Burnley was via that very same scoreline.

West Brom vs West Ham: Everything you need to know

West Ham have to win to keep their European dreams alive

West Brom almost claimed yet another draw against Liverpool when the two sides clashed on Sunday until Liverpool's goalkeeper scored a late headed winner from a corner to pinch all 3pts and really sum up their season. The Baggies have been competitive in their last four matches, even though none of those games have lead to victories, and we're expecting another game like that on Wednesday. Ivanovic and Snodgrass will both miss this game as they have recent matches through injury.

Masuaku and Lanzini could return to the visitor's squad for the trip to West Brom but neither will be expected to start the game. West Ham could only manage a draw in their last game against Brighton when really they needed a win, so needless to say, a win is the only result that will please David Moyes on Wednesday. With West Brom already relegated, West Ham should have all the motivation and desire to win this game but we have seen relegated sides secure surprise wins once the pressure is well and truly off them. However, we're backing West Ham to do just what they did the last time they clashed with the Baggies and win the game 2-1. 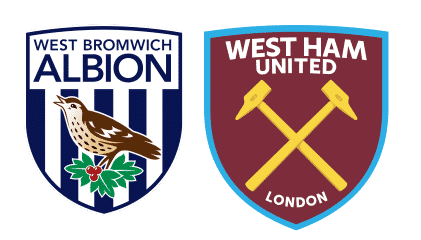