Watford will be expecting another tough game in the Premier League this weekend when they play host to Arsenal. However, the Hornets held Man Utd to a draw last time out and the Gunners haven't been the most consistent side this season, so Watford will feel like they can get something from this game.

We're predicting that Sunday's game will be tight and tense throughout just as the last meetings between these two sides were. Three of the last five encounters between Watford and Arsenal have produced under 2.,5 goals, including Arsenal's 1-0 win at the Emirates back in November. Five of Watford's and four of Arsenal's last six outings in all competitions have witnessed fewer than three goals scored, so you can see just why we're expecting a low-scoring 90-minutes on Sunday.

Saka is second in the Premier League goalscoring charts for Arsenal this season with 7-goals and we're backing the England International to find the back of the net against Watford this weekend. Saka, 20, has scored 4-goals in his last six league games for the Gunners, so heads into the Watford game in great form.

Arsenal expected to swot the Hornets away at Vicarage Road

Nobody expected Watford to come away from Old Trafford with anything following the Hornet's 4-1 defeat in their own backyard against Crystal Palace. However, Watford managed to frustrate Ronaldo and co by holding out for a goalless draw and what could be a crucial point come the end of the season. Watford could move up one place with a win this weekend and that could take them level on points with Everton, so there is plenty to play for on Sunday.

Arsenal fans may have feared the worst when their side went a goal down at home to Wolves after just 10-minutes. The Gunners trailed at the break and as the time ticked away it looked like a defeat was on the cards. However, with 8-minutes left on the clock, Pepe equalised for the hosts and deep into stoppage time Sa scored an own goal to hand Arsenal all 3pts.

Watford: Nkoulou, Femenia, Sarr and Etebo are the main injury concerns for the hosts this weekend.

Arsenal: Smith Rowe could miss out due to illness and Tomiyasu is expected to miss the game through injury. 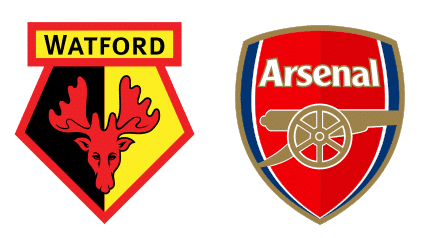