Swansea vs Bournemouth: Check out our betting tips

Bournemouth can open up a five point gap on third place with a win here with games very much running out for the chasing pack. Can they get the three points? Find out with our Swansea vs Bournemouth match preview with free tips, predictions and odds mentioned along the way.

First of all, we would like to point out that Swansea have been a difficult team to beat recently; as they have no losses in their last eight games. To be fair however, the Swans have had some difficulty winning games recently; they are coming off three consecutive draws. Despite their good form, Swansea tend to fall short whenever they take on Bournemouth; they've met Bournemouth ten times in the past decade, and they did not win any of those encounters. Bournemouth have seven wins and three draws in those clashes. Furthermore, Bournemouth have also been a difficult team to beat, as they lost just once in their last 10 games. Considering how Bournemouth tend to play well against Swansea, we're predicting a win for the visitors.

We've already established that Swansea have not been able to defeat Bournemouth in 10 encounters; we should also mention that they have found it difficult to score when they face Bournemouth. In fact, Swansea did not register a single goal in the last seven meetings between these sides. Additionally, Bournemouth have had the best defense in the Championship this season; they've allowed the fewest goals in the league so far. It's worth mentioning that Bournemouth kept three clean sheets in their last four games, conceding just once in that stretch; and for this reason, we believe at least one of these teams will keep a clean sheet.

Here are the key stats & form guide for Swansea vs Bournemouth

Swansea fans had imagined something Bournemouth-like when Russell Martin took charge of the club but only the Cherries have delivered across the entire season. Swansea can use this game as a measuring stick for what next year could hold in store though.

Swansea have enjoyed a good run of form in recent weeks; they are unbeaten in their last eight games, with four wins and four draws. It's fair to point out that the Swans are coming off three consecutive draws; they'll hope to get back to winning ways as second-placed Bournemouth come visiting.

Bournemouth have no losses in their last four games, they lost just once in their last 10 games; conversely, it's worth noting that Bournemouth won just one of their last five games. Scott Parker's men will take on an in-form Swansea side at the Swansea.com Stadium; they'll hope to hand the Swans their first loss in nine games. 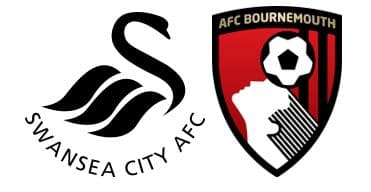