Strasbourg and Troyes have both lost their first two games in Ligue 1 this season. These teams lock horns in the third round and so, the big question is which side will win? We have a detailed preview of this game in this post, including the best tips for our readers.

Football Whispers soccer predictions have been extensively researched and contain no bias. Our best free three tips and predictions for Ligue 1 fixture between Strasbourg and Troyes are as follows:

Note: The odds for Strasbourg vs Troyes are correct at the time of publishing this preview. Please confirm your betslip with the bookmaker for updated odds before placing your bet.

Both teams to score: Yes

Our first prediction for Strasbourg vs Troyes is goals on both ends of the pitch. These teams are struggling defensively having conceded six and four goals respectively in the first two games this season. For a price of 10/11, you get a value bet with our prediction on NetBet. Moreover, both sides have leaked at least a goal in their last seven games.

We are also tipping lots of goals in this fixture. These teams have unpredictable defences coming to this game. Losing the first two games have condemned Strasbourg and Troyes to positions 20 and 19 respectively. There were more than two goals in 3 of the last five encounters, a trend we will likely see in this fixture.

The hosts to win

Even with six goals conceded in the first two games, two more than goals leaked by Troyes, Strasbourg is our favourite to win this game. The hosts have never lost at home after hosting Troyes seven times since August 1999. Strasbourg has won the last two fixtures at home when they played against Strasbourg and so, we think getting another victory over the promoted side, Troyes is likely.

Match Preview: Can Troyes get their First Victory away at Strasbourg

Troyes faces another tough test on the road on the back of an away loss to another promoted side, Clermont Foot 63 last weekend. The visitors’ last meeting with Strasbourg back in February 2018 was a 2-nil loss, the season they were relegated to Ligue 2. This fixture is important for both sides, especially because they are yet to get the first victory in the Ligue 1 this season. While being relegation candidates this early in the season is not something to worry about, troubled defences on both sides is an issue that could cost them lots of matches this season. For us here at Football Whispers, we think this game will have lots of goals at full-time. 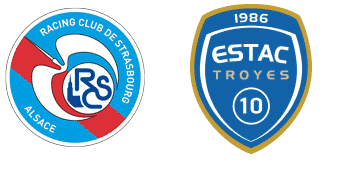 How do Strasbourg and Troyes compare in history?

These teams have met 14 times during which Strasbourg recorded 7W while Troyes had 4W. The remaining matches (3) were draws.

Which team will host this game?