Both teams have had identical results recently; they both had no wins in three matches heading into last weekend, and both teams ended their respective winless streaks. In fact, both teams have exactly two wins, a draw and two losses in their last five respective games across all competitions. Additionally, recent meetings between these sides have been even contests; as both teams have three wins apiece in their last six clashes. There isn't much separating the two sides; considering both teams' form, we believe the spoils will be shared at the end of this match.

Next up in our tips is an under 2.5 goals tip. Swansea have struggled in front of goal recently; they failed to score in three of their last four games, with just one goal scored in that stretch. Due to their lack of goals, Swansea's games have mostly been on the low scoring side; all of their last six games went below the 2.5 goal mark. As a matter of fact, four of the Swans' last five games went under 1.5. Similarly, Stoke City have had their fair share of low scoring games;  five of their last six games went under 2.5. On that note, we shouldn't expect too many goals in this match.

Check out the key stats & form for Stoke vs Swansea

Both of these sides are in the bottom half of the Championship, which is not where they want to be. Promotion is long gone now so it's about finishing as high up the standings as possible. With the two of them close together in the table this game could decide who finishes above who.

Stoke City broke their three game winless streak by defeating League One side Wigan in the FA Cup last weekend. Michael O'Neill's men are 14th on the Championship table, with just 11 wins from 28 league games. The Potters will hope to get their second consecutive win as they host Swansea.

Just like Stoke City, Swansea put an end to a three match winless run by defeating Blackburn Rovers last weekend. Although they played with 10 men for over a third of the game, they managed to hang on for the win. The Swans will hope to string up consecutive wins for the first time since November last year.

A brief FAQ ahead of Stoke vs Swansea 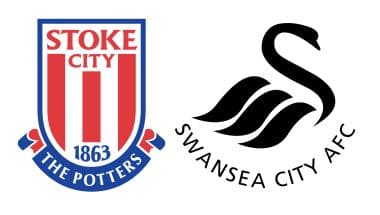