Blackburn suffered a bitter blow to their promotion hopes as they lost to relegation threatened Peterborough last time out. Can they bounce back here by beating Stoke? Find out with our Blackburn vs Stoke match preview with free tips, predictions and odds mentioned along the way.

Blackburn are coming off a loss against Peterborough, who were in last place at the time; they have had a disappointing run of form recently, with no wins in their last four games. As a matter of fact, Blackburn won just one of their last eight games; they drew three and lost four of those games. In comparison, Stoke City have been relatively better recently; they have three wins in their last five games. Additionally, we would like to point out that Blackburn won two of the last six meetings between these sides, and those wins were on the road; they have no wins in Stoke City's last three visits. With all this in mind, we believe that Stoke City will take at least one point from this game.

Not expecting loads of goals

Meetings between Blackburn and Stoke City have mostly been on the low-scoring side; all of their last four encounters went under 2.5, with three of those games going under 1.5. In fact, these teams scored just one goal per game on average in those four clashes. In the same vein, both teams have had their fair share of low-scoring games; 14 of Blackburn's last 17 games, and three of Stoke City's last five games went below the 2.5 goal mark. For this reason, we shouldn't expect too many goals in this match.

Here are the key stats & form guide for Blackburn vs Stoke

Blackburn vs Stoke: Let's look at the predicted lineups

This game obviously sees two teams take to the grass but, in reality, it's only a big game for the home side, Blackburn. They currently sit outside of the playoff places with time running out and rally need to find a way to win a couple of games. For Stoke, they need to use this as a way to build positivity ahead of the summer.

Blackburn have been going through a tough time the past couple of months; they are without a win in their last four games, and have just one win in their last eight games. Tony Mowbray's men have dropped out of the promotion playoff spots as a result of their poor run of form; they'll hope to get back to winning ways here.

Stoke City have had some mixed results recently; they have three wins and three losses in their last six games. The Potters are coming off a disappointing loss at home to Bristol City; they'll hope to rebound from that loss as they take on a struggling Blackburn side.

A quickfire FAQ on Blackburn vs Stoke 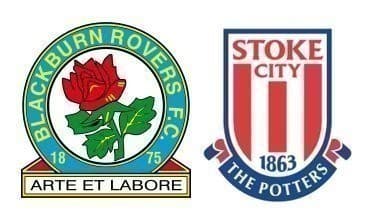