Stoke vs Birmingham: Check out our betting tips

In many ways this affair could be a rather drab one with neither team not having a great deal to play for. In isolation though, it could be a good game. Who will win it? Find out with our Stoke vs Birmingham match preview with free tips, predictions and odds mentioned along the way.

Nothing to separate the sides

In their last five league games Stoke have won one, lost two and drawn two. Birmingham have achieved exactly the same record across their past five meaning the sides are near inseparable in the form table. It's not just those records that bring us to our prediction of a draw though. Not only are the records similar of late but you'd argue the better performances have come more recently with Forest beating Swansea and drawing with Nottingham Forest whilst Brum thumped Luton in their last game. Then you have the head to head record to consider as well; two of the last three meetings between these teams have ended all square.

Both teams will score goals

No matter how you spin the recent form of both Stoke and Birmingham the word ‘consistent' is not one that comes to mind. What has been a consistent feature of their play though is their ability to score goals and that's why we fancy them to both register on the scoresheet when they meet on Saturday. Stoke have managed to score at least once in nine of their last 10 games. Birmingham have also scored in all bar one of their previous 10 games.

Here are the key stats & form guide for Stoke vs Birmingham

It's only February and, when in the second tier, clubs like Stoke and Birmingham should really have something still to play for. With any slice of realism, that's not really the case right now. Can they at least put on a show for their fans?

If Stoke's season isn't going to plan as a whole, they can at least take some positives from recent form as they sit on a four game unbeaten run in all competitions. They'll see this game as an opportunity to make it five games without defeat.

Birmingham's season might be heading for a dull end but that's better than what could have been had they not came away from their recent trio of clashes with the bottom three without having tasted defeat. A win over Luton last time out is proof of what they can do; now they need to show it again. 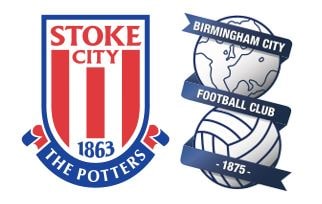