St. Mirren and Ross County go head-to-head in the Premiership on Saturday, August 13th. The division’s bottom two clubs face off at The SMISA Stadium this weekend. Read our free predictions and find the latest odds for the fixture below in our detailed match preview.

St. Mirren and Ross County are both searching for their first points of the new Premiership campaign when they meet on Saturday. Read our top predictions for this weekend’s fixture below.

St. Mirren and Ross County occupy the bottom two places in the Premiership after two rounds of games following back-to-back defeats, though the visitors look ready to post a first positive result at their host’s expense on Saturday. Ross County claimed four points from their last two encounters with St. Mirren in 2021/22 and those results were recent enough to give The Staggies a crucial psychological edge this weekend. With that in mind, we recommend siding with the visitors in the double chance market.

After suffering defeats in each of their first two fixtures of the new Premiership campaign, both St. Mirren and Ross County could adopt a cautious approach in Saturday’s game. Just a single goal – which was hit from the penalty spot – hit the net across the teams’ last two tussles and we expect action to be just as thin on the ground when they reacquaint themselves on Saturday. With reliable goal-getters in short supply in both camps, stick to the under 2.5 goals line here.

Check out our selection of the top stats for Saturday’s match below alongside a tool to help you choose the best odds.

Read all of the latest injury updates and team news for Saturday’s Premiership clash between St. Mirren and Ross County below.

Mark O'Hara has a concussion and will miss a couple of weeks of action, while Declan Gallagher is suspended this weekend following his early red card in St. Mirren's 4-1 reverse at Aberdeen. Scott Tanser could come into the Saints' back three in Gallagher's place.

William Akio is listed as Ross County's only injury absentee this week, though the midfielder should be back in contention before September. Ross County were beaten 3-1 by Celtic last time out, though they put up a decent fight for 84 minutes before they conceded two late goals against the champions. 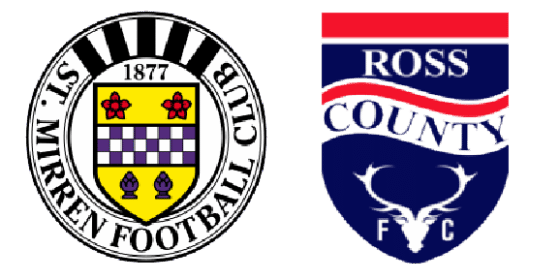 St. Mirren vs Ross County will be played at the The SMISA Stadium on Saturday.

Who are the current Scottish Premiership champions?