Saint-Etienne has a Ligue 1 engagement against Troyes on Saturday. The hosts were the winners in the reverse game that ended 1-0. However, despite some improvement in recent games that has seen the hosts lose only once in the last six Ligue 1 engagements, they are just three points above the relegation zone. Read our free preview for free betting tips.

Our Free Saint-Etienne vs Troyes Predictions

Only two points separate 15th placed Troyes and 18th placed Etienne ahead of this fixture. And with both teams fighting to secure more survival points, we have tipped these teams to engage in a hard fought Ligue 1 encounter that will likely end as we have predicted below.

Saint-Etienne will likely score the first goal in this Ligue 1 fixture. The hosts are determined to survive relegation and with ten games left to play, a home victory is the perfect opportunity to get the important survival points. Apart from the barren draw the last time out, Etienne has been consistent in scoring goals.

They come to this game having failed to score only once in the last six outings and only one loss within that duration. On the flipside, Troyes bagged back to back clean sheets wins in the last two but lost twice in their six games. These teams have met 17 times, with Etienne winning 10 of them and losing only thrice to the visitors.

We expect both teams to score in this game. While St. Etienne has historically dominated this fixture, they have struggled to keep a clean sheet in recent games. The hosts boast only two clean sheets in the last ten games across different competitions.

The latest stats, team form and the best odds for this Ligue 1 game are captured in the table below.

At positions 18 and 15 respectively on Ligue 1 table, Saint-Etienne and Troyes are clearly struggling teams that look to get the better of each other in this encounter. Ten wins for Etienne against Troyes’s three victories and four draws in the last 17 meetings signal a game that will likely have a winner.  The hosts have the home support and defeated Troyes in the last two encounters. However, only two games from the last five meetings had goals on one side, all in favour of Saint-Etienne.

Moreover, Saint-Etienne won three of the last five meetings, two of which were clean sheet victories. The last seven meetings saw Etienne bag five wins, a record that put the hosts ahead of Troyes as the favourite side to bag all points in this game. And with back to back clean sheet wins ahead of this game, they could have challenges finding the net against a team determined to protect their 1-0 victory in the reverse game. 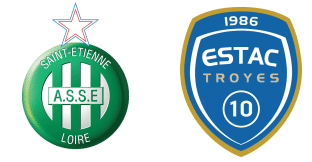 Where is the venue for Saint-Etienne vs Troyes game?

The match will be played at Stade Geoffroy Guichard in Saint-Etienne, France.

What is the record of these teams in the last five games?