QPR vs Cardiff: Check out our betting tips

QPR are in desperate need of some points if they're to remain in the playoff places for much longer. Can they bag three here as they host Cardiff? Find out with our QPR vs Cardiff match preview with free tips, predictions and odds mentioned along the way.

Warburton's men to take the points

When you look at general form there is very little between these sides, however, scratch a bit deeper and you'll find plenty of reasons why we are backing the home side to run out winners. For one thing, there is a reason that QPR sit near on 20 points better off than their visitors; that's all about the fact they have better quality in their ranks. On top of that, QPR might have had a little wobble of late but they've not lost a home match in 2022; they've played seven times since then. Compare that to Cardiff's away form and you've got a stark difference in result; the Bluebirds have lost their last three games on the road. They've also lost on their last four visits to QPR's stadium.

Goals won't be in huge supply

Next up in our tips for this game we turn to the total goals market and we are predicting this match between QPR and Cardiff comes up short of the 2.5 mark. Just one of QPR's last five matches have gone over 2.5 goals with just nine goals seen across those games; that's an average of just 1.8 goals per match. Cardiff's form in goals terms is very similar. Again, just one of their last five games have hit the three goal marker with and, again like QPR, they've seen nine goals in that time. The last two head to head meetings have seen just the solitary goal in them as well.

Here are the key stats & form guide for QPR vs Cardiff

We're not sure there were many people who thought these two sides would have quite so much distance between them at this stage of the 2021/22 campaign back in August but here we are. With QPR overachieving and Cardiff having a poor season, is there only one way this game goes?

QPR have been in poor form of late with their playoff spot far from secure. The good news for the Hoops, however, is that the one win they've recorded in their last five matches came in the only home game they've played in that period. It means their home form remains strong so they'll be confident of grabbing a result.

Cardiff have been utterly woeful this season but, thankfully for them, there are a number of teams that have been worse. Relegation is not a concern for this season so each game is all about building and shaping for next season. Away games like this are a decent yardstick for how far they have to go to close that gap. 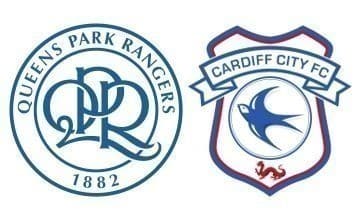