Cluj to win to nil

Cluj should have won the first leg but didn't. Will they manage to get the result they need here? Find out with our Cluj vs Pyunik match preview with free tips, predictions and odds mentioned along the way.

Cluj to win it to nil

We kick off our tips for this game with a bet that backs Cluj to win to nil. They have decent form for winning games with seven wins in their last 10 matches and six of those have been won without conceding. On top of that, they also kept a clean sheet in the first leg against Pyunik who themselves have only averaged one goal per game across their past five. Considering the lack of attacking threat they showed in the reverse fixture combined with the fact they're now the away team it's hard to see them scoring. As for losing the game, surely Cluj's dominance will see them breakthrough at some point.

Let's cut to the chase; we do not expect this game to see many goals. Pyunik will likely be looking to keep Cluj at bay whilst each of their past five games have gone south of the 2.5 goal mark. As for Cluj, they've only hit the three goals in two of their past five with their average goals per game across that period sitting at 1.8. With stats like those, goals are hardly likely to pour down.

Here are the key stats & form guide for Cluj vs Pyunik

Something has to give as two in form teams lock horns

Cluj might have dominated the first leg but they weren't able to find that elusive goal to give them that would give them the all important lead in this tie. That means Pyunik will arrive with something to hang on to and that's exactly how we expect them to approach this game. Should Cluj find a way through though the visitors will need to change tact to stand any chance of progressing.

Cluj aren't strangers to Europe's elite competition and they'll be desperate to get over the line in this tie after leaving the first leg with a goalless draw. On top of that draw, they have won seven of their past 10 games with just two defeats in that time. One of those losses came last time out but with mass changes ahead of this match.

Pyunik might still be very much in this tie but they've got their work cut out to progress beyond Cluj. Obviously, they're the away side this time, which makes it a tougher ask in itself and, on top of that, they rode their luck when at home having faced 16 shots. Will lady luck smile on them again here?

A quickfire FAQ on Cluj vs Pyunik 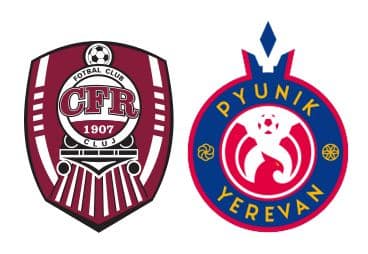