PSG vs Lorient is the last Ligue 1 game to be played this weekend. The Parisians missteps in the last game against Monaco ended in a 3-0 defeat, a result that slowed their title charge. Will they regain their pose and focus in this 30th game of the French Ligue 1, 2021/22 season? Read this preview for the in-depth analysis and free tips.

PSG lost 3-0 to AS Monaco before the international break. The result was a major setback to the Parisians’ quest for an early crown in the French Ligue 1 title race. However, they are still very much in charge even with nine games to go. Our best free predictions for this game are:

PSG should get back to winning ways in this duel against Lorient. Losing 3-0 to AS Monaco was shocking, especially in a game that has Neymar, Mbappe and Wijnaldum in attacking positions. Even with the introduction of Icardi in the 69th minute to replace Wijnaldum, little improvement was noticed. However, after the international Pochettino’s men should come back stronger and more focused, hoping to bag the crown with a few games to spare. We have tipped the Parisians to win the first half in this game with Lionel Messi expected back in the starting 11.

Mbappe is on course to another golden boot. He currently has 15 goals, two less than top scorer Wissam Ben Yedder of Monaco. Backing Mbappe to score in this game is premised on his latest performances. The 23-year-old forward scored in six of the last seven Ligue 1 games. He is the leading scorer for PSG and is expected to be among the attacking front in this important game against Lorient.

Go through the latest stats for this game below and place your bet on the highest odds from the selected UK bookmakers.

PSG hosts Lorient in a duel that will determine their chances on the crown with nine games to spare. The Parisians are currently top of Ligue 1 table with 65 points after 29 games, 12 points clear of second-placed Marseille. A win in at least the next four games should hand PSG the title. However, shaky defensive performances have been a major challenge for Pochettino. The Argentine has had a fair share of criticism in as much he is poised to win his first major crown with a top European club.

While this fixture shouldn’t be about a battle for dominance given that these teams are far apart on the Ligue 1 table, Lorient is staring at the possibly of a relegation playoff. The visitors are 16th on the list and only one point above the relegation playoff spot.

Let’s how these teams could line up against in this encounter: 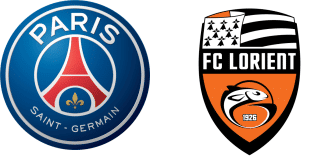 Par des Princes in Paris, France is the match venue

How did the reverse match end?

It ended 1-1 in a match that saw PSG’s Sergio Ramos pick a red card in the 86th minute.