Both Nottingham Forest and Stoke have won their last two games. Will either of them make it three wins on the spin or is a draw the most likely outcome? Find out with our Nottingham Forest vs Stoke match preview with free tips, predictions and odds mentioned along the way.

Stoke might be unbeaten in three having won the last two and drawn the game prior to that but they will be up against it when they visit the City Ground on Saturday. Nottingham Forest have won four of their last five games with their last two wins – over Leicester in the FA Cup and away at Blackburn – real noteworthy victories. Those games have created a real feel good factor around the club as they sit in sixth place and with home advantage to boot, they'll be confident of taking another three points.

Next up we have a both teams to score prediction for you and we are saying ‘yes' both sides will be amongst the goals. Nottingham Forest have scored goals in each of their last seven games. Now, they have kept a few clean sheets in that time but we think Stoke will have enough about them to find the net – even if we are backing the hosts to win the game. Stoke have scored in six of their last seven matches and have netted five goals across their last two games. Four of the last five head to head meetings have seen both sides score as well.

Check out the key stats & form for Nottingham Forest vs Stoke

Both of these sides will be thinking they've got the chance to make it to the playoffs come May right now. That means that this game can carry some real weight because the team that wins it will put a real dent in the losers plans.

Nottingham Forest might end up having one hell of a season the rate they are going right now. They're already enjoying a FA Cup run, which has included a couple of Premier League scalps, but they're in the thick of a playoff battle. Win this and their place in the top six will look even better.

Remarkably, Stoke are very much in with a shout at the playoffs. The Potters are down in 11th in the Championship standings but they have a game in hand over Nottingham Forest, who are sixth. If they win that they'll be one point behind the final playoff spot. Of course, this game comes first and that will determine whether Stoke can leapfrog Forest with that game in hand to come or whether Forest will pull further away.

A brief FAQ ahead of Nottingham Forest vs Stoke 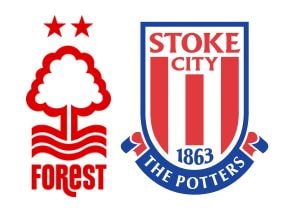