Nottingham Forest have now missed out on automatic promotion. Can they avoid the infamous slump to win here? Find out with our Hull vs Nottingham Forest match preview with free tips, predictions and odds mentioned along the way.

Encounters between Hull City and Nottingham Forest tend to feature lots of goals; three of their last four clashes went above the 2.5 goal mark. In the same vein, Hull City have been involved in a lot of high-scoring games; as all of their last four games saw at least three goals scored. It's also fair to point out that Nottingham Forest have been one of the highest-scoring teams in the Championship this campaign; only the top two teams have scored more goals than Forest. With this in mind, we believe that these teams will score at least three goals between them.

Hull vs Nottingham Forest: Let's look at the predicted lineups

Both of these sides have enjoyed good campaigns by their own remits with Hull safe from relegation by some distance and Nottingham Forest in the playoffs. Forest are big favourites but this should be a good watch.

Hull City have had some mixed results in recent weeks; they have three wins and three losses in their last six games. Shota Arveladze's men are coming off a disappointing 5:0 loss at the hands of Bristol City; they'll hope to rebound from that loss as Nottingham Forest come visiting.

Nottingham Forest's four match winning streak ended at Bournemouth a couple of days ago; as a result of that loss, they missed out on a chance of automatic promotion to the Premier League. Forest can still secure a place in the Premier League next season through the promotion playoffs; they'll look to bounce back from their recent loss with a win here.

A quickfire FAQ on Hull vs Nottingham Forest 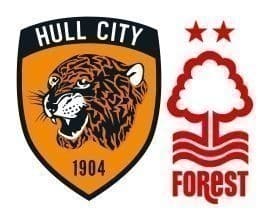