What a relegation 6-pointer we have on our hands in the Premier League this weekend as bottom of the table Norwich play host to a Brentford side in freefall. The Canaries have faced some very tough games of late and will be looking to get back to winning ways this weekend, while the Bees are in the midst of a dreadful run of form and could slip into the relegation zone this weekend if results elsewhere all go against them.

We're backing Norwich to win on Saturday just as they did when these two sides locked horns in Brentford back in November. The Canaries have won four of their last six competitive encounters with the Bees, including each of their last two league meetings. Brentford head into this game having lost five of their last six matches in all competitions and are without a win since their FA Cup tie with Port Vale back in early January.

We're expecting this game to be tight and tense throughout as both teams know how much a win, or a defeat, could be to their chances of staying in the Premier League for another season. Under 2.5 goals have been produced in five of the last seven encounters between the pair, while three of Norwich's and three of Brentford's last six outings have also ended with fewer than three goals scored.

Everything you need to know about Norwich vs Brentford

Can Norwich lift themselves off the bottom this weekend?

Brentford got off to a terrible start at home to Newcastle last time out, losing midfielder Dasilva to a straight red card in the 11th-minute. Newcastle never really looked back from that point on, netting a goal in each half to secure a comfortable 2-0 victory. Brentford now sit 3pts above the drop zone and have played more games than any of the teams currently ranked below them in the Premier League table.

Norwich were away at in-form Southampton in their last league game, where the Canaries went down by two goals to nil. The Saints scored a goal in each half and controlled the match for the most part, deserving their victory. Norwich sit bottom of the table as things stand but despite their poor recent results, each of those games have been against tough sides and the Canaries will still believe they can get out of trouble but need a win on Saturday.

Norwich: Aarons, Williams, Kabak, Idah and Omobamidele all have injuries that could keep them out of this weekend's match.

Brentford: Dasilva is suspended for the visitors, while Fosu and Jeanvier look set to miss out through injury. 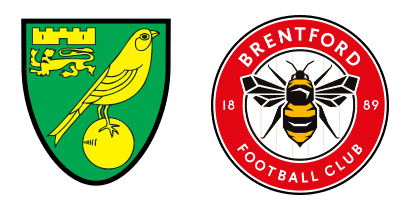