Fulham continue to gun for the Championship title and whilst it looks likely, it's not over until it's over. Can they grab a big three points on Teeside? Find out with our Middlesbrough vs Fulham match preview with free tips, predictions and odds mentioned along the way.

Boro's good home form to continue with a point

Middlesbrough have been exceptional at home of late with eight wins in their last 10 games at the Riverside Stadium; the two blemishes on that record have come against Premier League teams as well – they lost to Chelsea and needed extra time to see off Tottenham. With that in mind, we don't see them losing to Fulham – we don't see Fulham losing either though; the Cottagers have only lost two of 10 on the road with one of those defeats coming against Man City. You can further evidence a draw by looking at the head to head form; three of the last five meetings between Middlesbrough and Fulham have ended level.

Goals will be in limited supply

Both of these teams are decent but we don't see that translating to goals as they face off with one another. Three of Middlesbrough's last five games have gone under 2.5 goals whilst Fulham have gone south of the 2.5 mark in four of their last five matches. On top of that the head to head record makes an under 2.5 bet look wholly attractive with each of the last five – and seven of the last 10 – meetings coming in under the all important 2.5 cut off.

Here are the key stats & form guide for Middlesbrough vs Fulham

Middlesbrough vs Fulham: Let's look at the predicted lineups

This game sees top take on fifth in what should be a good match. Fulham want the points to push on for the Championship title whilst Middlesbrough are far from locked down in the top six just yet.

Middlesbrough have enjoyed a very good season to date with a cup run and the fact they're in the top six right now. Their form would indicate they've got a good chance of staying in the playoff places too with 10 points collected from their last five matches. Fulham won't be an easy game a good result would be another confidence boost ahead of the final push.

It's not mathematically done yet but you'd be a brave man to bet against Fulham winning automatic promotion. The title race is a tad tighter although Fulham remain in control of that too. Providing they avoid defeat here, they should be set for a steady run in with the title a case of when not if.

A quickfire FAQ on Middlesbrough vs Fulham 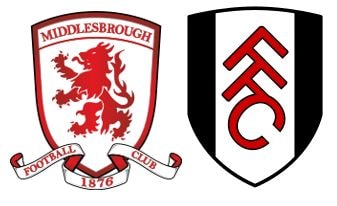