Nice has all eyes set on European competition next season. They will visit Metz whose goal is to stay as far as possible from the relegation zone. Read on to get an insight into the coming event.

Our best predictions for Metz vs Nice

Nice is aware that any slip will mean that they are dislodged from the second position in the table. The hosts ended their three-game winless streak with a win over Reims on 16/1/2022. Here are our top predictions:

Nice picked up another crucial win over Nantes coming from behind to secure all the three points. This performance was a statement of intent from the team that is in fine form this season. Metz pulled a surprise result over the weekend to jump out of the relegation zone. Nice has been fantastic on the road this season. They secured four wins from their last five games away from home. During the five events, Nice kept three clean sheets. It will not be possible for the hosts to trouble the visitors who are determined to reach their top-four target this season.

Nice conceded first on one occasion from the last five away games in the league. The hosts went behind three times at home from their last five games in front of their fans. The visitors have excelled thanks to a fine defensive display. We anticipate the tightness in the defense to continue in this fixture. We don't expect the hosts to get onto the score sheet when they welcome Nice at Stade Saint Symphorien. We however anticipate a very competitive match because neither side has been dominant in this fixture over the past few seasons. Both teams have won three matches each in this fixture.

Make the most of the best odds sampled across leading UK bookies below.

Nice comes to this fixture at the back of five wins in a row. The Eaglets are high-flying in the League. Things are finer away from home because they are the best in the league at the away table. They have won seven away games in the league this season. They are facing a team that is second from the bottom in the home table this weekend. We expect that Nice will be given a run for their money on 23/1 when they visit Stade Saint Symphorien stadium. This match will be tough because the hosts have only lost two matches in front of their home fans.

Nice will be without several players due to injuries. They include Centonze, Jemerson, N'Doram, Cabit, de Preville and Udol. The hosts will also be without Kouyate, Bronn, Maiga, Boulaya, Oukidja, Sarr and Alakouch who are on international duty. On the other hand, the visitors will be without Bambu, Kluivert, Lemina and Atal.

Here is our predicted lineup for Metz vs Nice on 23rd January 2022.

FAQs about Metz vs Nice 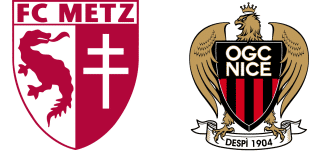 What is the venue for Metz vs. Nice?

Who will be the referee for the game between Metz and Nice?

Which team has won the most duels between Nice and Metz?