One game stands between these teams and a place in League One. Who will come out on top? Find out with our Mansfield vs Port Vale match preview with free tips, predictions and odds mentioned along the way.

Mansfield to win it in normal time

We kick off our League Two playoff final predictions by backing Mansfield to win the match inside 90 minutes. They arrive in the showpiece game having gone six matches unbeaten with two draws and, notably, four wins. Port Vale meanwhile have stumbled their way to the final. In their last six matches they've won two and lost four. On top of that, Mansfield hold the edge there too. Port Vale won the last clash but prior to that, Port Vale have failed to best Mansfield in six attempts.

A playoff final with goals

Sometimes playoff finals can be cagey affairs; we do not see that being the case here. Mansfield have seen three of their last five matches go over the 2.5 goal mark with a total of 14 goals in that period; that's an average of 2.8 goals per game. Port Vale come up a tad short of the 2.5 goal mark in both those metrics; they've gone over 2.5 in two of their last five and an average of 2.4 goals per game. The key thing to consider though is the head to head record; four of the last five meetings between Mansfield and Port Vale have gone over 2.5 goals.

A spot in League One awaits the victor

There are very few words needed to explain how big this game could prove to be for both Mansfield and Port Vale. The winner will move into the third tier of English football whilst the loser will have to dust themselves down to go again in League Two.

Mansfield only just made the cut for the playoffs but that could stand them in good stead here. In order to secure that spot, they had to find form. That's exactly what they did and now they have some real momentum behind them.

Whilst Mansfield arrive here in good form, the opposite is almost true for Port Vale. Had their form been a little stronger towards the end of the campaign, we could be talking about them having had their promotion confirmed already. It wasn't to be and now they need to focus solely on this match.

A quickfire FAQ on Mansfield vs Port Vale 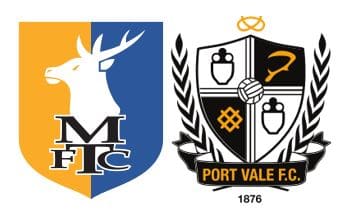