Hoffenheim and Mainz meet at the PreZero Arena in the Bundesliga on Saturday, September 10th. Mainz have their eyes on top spot as they prepare to face Hoffenheim this weekend. Read our free predictions and find the latest odds for the fixture below in our detailed match preview.

Mainz have won each of their last three meetings with Hoffenheim ahead of the teams’ tussle on Saturday. Read our top predictions for this weekend’s fixture below.

While both teams will be pleased at their respective starts, Mainz have performed marginally better than Hoffenheim in the early exchanges of the new Bundesliga campaign and Die Nullfünfer could even go top of the Bundesliga if results go their way this weekend. Recent encounters between the clubs hint that Mainz might be able to grab the result they need to climb to the summit. They’ve won each of their last three meetings with Hoffenheim – a run that suggests they are generously priced in the double chance market on Saturday.

While a positive result could be in the works for Mainz on Saturday, a clean sheet at the PreZero Arena might be more difficult to secure. Hoffenheim have failed to find the net in just once of their five Bundesliga assignments since the summer and they have enough goal-getters in their ranks to notch this weekend. Mainz have scored in nine of their last ten tussles with Hoffenheim however, so expect goals to be hit at both ends on Saturday.

Top Betting Odds and Stats for Hoffenheim vs Mainz

Check out our selection of the top stats for Saturday’s game below alongside a tool to help you choose best odds.

Read all of the latest injury updates and team news for Saturday’s Bundesliga contest between Hoffenheim and Mainz below.

Philipp Pentke, Benjamin Huber and Ihlas Bebou have all been ruled out for Hoffenheim while Stanley Nsoki and Ermin Bicakcic are considered doubtful. Hoffenheim slipped to a narrow 1-0 loss at Borussia Dortmund in their last match.

Mainz have relatively few injury worries ahead of the weekend. Marcus Ingvartsen and Danny da Cost will both be absent from the team's attack and defence respectively. Mainz carved out an impressive 1-0 win at Borussia Monchengladbach last weekend. 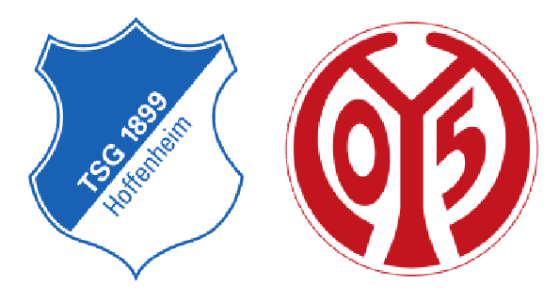 Mainz beat Hoffenheim 2-0 when the teams last met in February.

Hoffenheim vs Mainz will be contested at the PreZero Arena on Saturday.