Luton vs Derby: Check out our betting tips

Derby's survival hopes have been dealt a major blow in the last seven days with Reading taking six points. That means the Rams need wins and soon. Will they get one here? Find out with our Luton vs Derby match preview with free tips, predictions and odds mentioned along the way.

Derby might have been showing fight all season long but, take emotion out of things, and you cannot turn a blind eye to three losses in five and four away defeats on the bounce; that's the reality of where Derby are right now. A trip to Luton means things don't get any easier for Wayne Rooney's men either. The Hatters are unbeaten in seven games at home and, more generally, have won four of their last five matches in all competitions. Luton have beaten Derby in the last two meetings at Kenilworth Road too.

Our second tip for this match is that we'll see goals for both sides. Luton have scored goals in four of their last five matches whilst conceding goals in three of those games. Derby meanwhile have netted in each of their last four games keeping just the one clean sheet across their past five matches. Three of the last four head to head games have seen goals at both ends too with the most recent meeting – in October – having ended 2-2.

Here are the key stats & form guide for Luton vs Derby

If there is anything that shoves Derby's situation as a club into stark reality then it is perhaps seeing a ‘much smaller' club like Luton fight for the playoffs as the Rams stare relegation in the face. The result of this match might not change any of that either.

Luton fans must be in dreamland right now. Not only are their club fighting for a top six finish in England's second tier but they're coming into the latter months of the season in really good form. This game is very much a winnable one as well. Dare they dream?

If Luton fans are riding a wave of happiness and hope, then Derby are perhaps best described as drowning slowly underneath it. They've battled hard all season long and then, just when they were in striking distance, Reading win back to back games to open up a sizeable gap to fourth bottom. The gap needs to narrow – starting here. 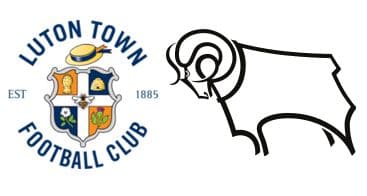