Can Luton keep up the pace in their hunt for a top six finish? Find out with our Cardiff vs Luton match preview with free tips, predictions and odds mentioned along the way.

Cardiff to spring a surprise

Sorry Luton fans, if this prediction comes true then it is not great news for you Hatters as we expect the Bluebirds to take the points. Sure, Cardiff have nothing to play for but their home form of late hasn't been too bad with seven points collected from their last 12 available. That's the same as Luton's away record across their last four matches albeit with Luton winless in their last two games on the road. The other important factor to consider in these games is the head to head record; Cardiff have won each of the last four meetings to prove this won't be a doddle for Luton.

Our next prediction for this match is that we'll see a game of very few goals – specially we are backing under 2.5. Cardiff have gone under that marker in three of their last five home matches averaging about 1.8 per match. Luton meanwhile have a not too dissimilar record away from home. They've also seen three of their past five fall under 2.5 but with an average of 2.4 goals per game.

Here are the key stats & form guide for Cardiff vs Luton

Cardiff vs Luton: Let's look at the predicted lineups

Cardiff's season is effectively finished already with absolutely no chance of them going anywhere but mid table. Luton meanwhile have it all to play for as they remain in a race for the top six.

Cardiff might be destined for a mid table end to the season but after a poor campaign that has seen them flirt with a relegation battle they owe their fans a few performances. A home game against a Luton side could be the perfect opportunity as the Bluebirds have a good record against the Hatters.

Luton could quite easily finish in the playoff spots come the end of the season but, if they do, they'd like to get their away form back in track after two games without victory. Whilst Cardiff hasn't been a happy hunting ground for them in recent times, it's also a good time to end that shoddy run with Cardiff having little to fight for.

A quickfire FAQ on Cardiff vs Luton 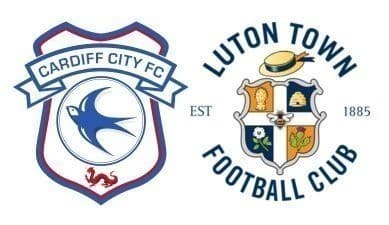