Nice finished the first leg of the 2021/22 season in fine form. However, things have taken a new turn in the second leg. Read on to find out whether Nice will return to its winning ways in this Sunday afternoon encounter.

Nice recorded a single win from its previous five Ligue 1 encounters. Here are our best predictions for the upcoming clash between Nice and Lorient.

Nice won four of the last ten meetings against Lorient in all competitions. The Eaglets know that a single win is enough for them to return to Champions League places if the result from the Strasbourg match favours them. We are tipping Nice to return to winning ways because of its strong home form. The Eaglets failed to win a single home match from the recent five games.

Nice’s main problem has been an inability to convert open chances into goals. Two goals from five consecutive matches do not reflect the strength of a team tailored for a European competition places. Lorient averages one goal per match from the recent five Ligue 1 encounters. Five of the previous ten encounters between these teams produced fewer than three goals each. We are tipping a low scoring duel in the coming Ligue 1 clash between Nice and Lorient.

Nice vs Lorient Odds and Stats

Pressure continues to mount on Christophe Galtier because Nice’s hope for a top-four finish is dwindling by the day. The eaglets have dominated this fixture in the past and will see Lorient as the ideal opponent to get back to winning ways. However, Christophe Galtier will do without Lemina and Dante due to suspension. Other players such as Schneiderlin and Claude are still doubtful due to injuries. The manager's 4-4-2 formation does not offer enough firepower upfront to earn Nice the necessary points for the European positions.

Lorient got a much-needed confidence boost by putting six past Saint-Etienne after a 5-1 thrashing by PSG. There is pressure in Lorient's camp because relegation is a reality should its players slumber in the remaining seven matches. Lorient won the reverse fixture against Nice and will rely on the hosts' poor run of form to snatch a point. We expect Christophe Pelissier to line up his side in a 4-5-1 formation as was the case against Monaco to trouble Nice.

FAQs about Nice vs Lorient Match 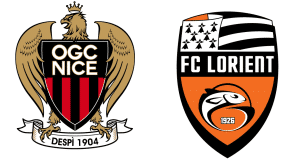 What is the venue for the coming Nicevs Lorient?

The next Nicevs Lorient game takes place at Allianz Riviera.

Who will referee the coming Nicevs Lorient encounter?

What is the kick-off for the coming Nicevs Lorient?

The next Nicevs Lorient kicks off at 1400 hours +GMT