Lille hosts Clermont for the 27th game of the French Ligue 1 2022 season. The visitors are looking to garner more points even as they hope to move further away from the drop zone. Will they get some points against the reigning champions? Read our game preview for the best tips for this Ligue 1 match.

Our Free Lille vs Clermont Prediction and Tips

Lille has a chance to build on their last game which they won 1-0 on the road at Lyon. Find out how we have tipped the reigning Ligue 1 champions to perform against Clermont in this game.

Despite losing to Clermont in the only previous meeting between these teams, Lille is the favourite to bag all points in this game. The Ligue 1 returning champions put their troubles behind the last time out to defeat Lyon away from home. It was a huge result for Lille considering that they have been inconsistent in the last five games before last weekend. Most importantly, experience in top flight, playing at home and against promoted side should hand Lille all the advantage they need to win this important game.

While the hosts are our favourites in this game, they haven’t been doing well offensively. Lille has scored only two goals in the last four fixtures. Clermont’s scoring run is not as bad but it will be a hard-fought match as Lille will be keen to get another victory. A clean sheet win for Lille would be most welcome by the hosts and it could be their two wins in a row after failing to so in eight games.

Here are the latest stats showing the forms of these teams as well as our handpicked UK bookies with the best odds.

Lille got three points away from home against Lyon the last time out. It is was  a huge result by their standards this season.  And now, the reigning Ligue 1 champions will host Clermont in the Round 27 of the French Ligue 2022 season. It will also be the second meeting between Lille and Clermont, a match that many expect to be exciting as the hosts look to get back to back victories after going without one in the last eight games.

The focus on this game is the performance of head coaches of these teams. There have been five meetings between Lille's head coach, Jocelyn Gourvernnec, and his matchday opponent, Pascal Gastien. In the five meetings, only one draw was recorded between the two managers, 3W for the hosting coach and 2W for the visiting tactician. 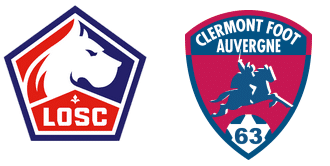 Who will referee Lille vs Clermont match?

Thomas Leonard will be the referee in this Ligue 1 match.

What time will Lille vs Clermont fixture start?

Where will Lille vs Clermont game take place?