Millwall remain in touching distance of the top six but with teams between them and sixth and games running out, they need to put a winning run together. Can they start that here? Find out with our Millwall vs Hull match preview with free tips, predictions and odds mentioned along the way.

Lions to see of Tigers

With consecutive wins against Middlesbrough and Cardiff, Hull City have ensured they'll stay in the Championship for at least one more season. Shota Arveladze's men are 19th on the table; they are 16 points clear off the relegation zone, and 18 points from the promotion playoff places with just four games left. At this point, Hull City don't have much to play for, as they can't get promoted or relegated. However, Millwall are there points from the promotion playoff spots; they need all the wins they can get, starting with this game. This will likely go down to who needs it more; that's why we believe that Millwall will win.

We won't see goals for both teams

Millwall have both impressed and disappointed in goal scoring terms; they kept five clean sheets in their last 10 games, whilst failing to score in four of them. As a result, Millwall's games don't usually feature goals at both ends; at least one side failed to score in seven of their last 10 games. In like manner, Hull City kept four clean sheets in their last nine games, they also blanked in four of those games. Just like Millwall, Hull City's games have mostly been one-sided when it comes to goals; at least one team did not score in seven of their last nine games. All things considered, we're making the prediction that one of these teams will fail to score.

Here are the key stats & form guide for Millwall vs Hull

Millwall vs Hull : Let's look at the predicted lineups

Hull are mathematically safe with four games left to play, which is a big achievement. Now though, not only can they put more distance between themselves and the bottom three but they can deal a blow to Millwall's feint playoff hopes too.

Hull City's form has improved a bit recently; they are coming off back-to-back wins, having managed just one win in five games prior to that. Shota Arveladze's men are now 16 points clear off the relegation zone with just four games left to play; they'll hope to string up three wins in a row for the first time since January.

A quickfire FAQ on Millwall vs Hull 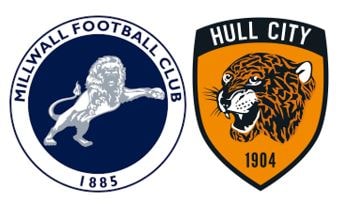