Sebastian Hoeness was left scratching his head as TSG Hoffenheim's away trip to Stuttgart resulted in a third defeat in five matches. They have another tough task on their hands as high flying Cologne make the trip to the PreZero Arena.

Here are our predictions for Hoffenheim vs Cologne.

Being a Hoffenheim fan is not easy at the moment due to the range of emotions felt after their performances. Sebastian Hoeness will hope the outpour is positive as they look to continue their impressive return against Cologne. They have not lost to the Billy Goats in twelve meetings, winning the last six in succession. With Wolfsburg brought back to earth in their last home fixture, Hoffenheim should exact a similar result against the team from NRW.

Whether the result has gone in their favour or not, goals are a certainty in Hoffenheim's outings. Six of their eight competitive fixtures have concluded with an Over 2.5 total goals tally this season. For Cologn, the statistics board reads five in eight matches. As the two teams face off with each other, we expect another goal bonanza that should conclude with at least three goals.

With one goalless draw, one shut out and one clean sheet accumulated, both teams have generally scored in matches involving Hoffenheim. For Cologne, one does not have to dive deeper into statistics as each of their Bundesliga fixtures has seen goals at either end of the pitch. With both sides have issues at the back and compensating them with their offensive marksmanship, this match should see both Hoffenheim and Cologne on the scoreboard.

Hoffenheim vs Cologne: Check out the best odds and the latest stats

Match Preview of Hoffenheim vs Cologne: Hoeness out of ideas at Rhine-Neckar-Arena

In a season that was supposed to provide much, Hoffenheim are struggling to prove their mettle. Sebastian Hoesness' second season in charge was supposed to bring stability to their ranks but Die Kraichgauer continue to give uncertain performances. They beat high flying Wolfsburg at home, only to follow that up with a defeat to Stuttgart on the road. With the Billy Goats arriving in high spirits, question marks remain about their ability to deal with their challenge.

Cologne are in a good mood and with good reason. They are seventh on the points table after going into the international break with a 3-1 win over Greuther Furth. With just one defeat this season, they have shown an uncanny ability to stave off unfavourable results and find themselves in UEFA competitions contention places. With just four points separating them from pole position, Steffen Baumgart needs to be applauded for the work done at RheinEnergieStadion.

Questions About Hoffenheim vs Cologne 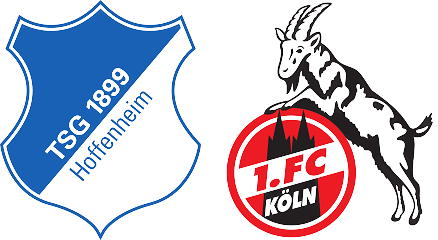 Who won the last h2h? 3-0 in favour of Hoffenheim

Where is the game being televised? DAZN Deutsch, Match! Futbol and Sky Sports Football.