The first game in this La Liga round scheduled for Sunday is Granada vs Osasuna. With that in mind, we have prepared a detailed preview of the match for you.

Our favourite Granada vs Osasuna betting picks and tips

If you are looking for free La Liga betting tips, including our predictions for Granada vs Osasuna, we can help you out:

While both teams enter this game after losing in the previous round, Granada has been in much better form recently and they were without a defeat for seven games before their loss to Getafe.

In addition to this, Granada beat Osasuna in three of their last five head-to-head duels, so our prediction is for Granada to win this match in front of their fans.

Both teams have scored in the last two h2h meetings between Granada and Osasuna and we believe that this could be a start of a new trend in their duels.

After all, both teams scored in 67% of all Granada matches in La Liga this season, while the same is true for 43% of all Osasuna games in the league so far.

Top stats and odds for Granada vs Osasuna

If you are trying to find the best Granada vs Osasuna odds, check our selection of odds from a few different UK betting sites:

The two teams are nearly tied in La Liga standings, so this should be a close game. Let's take a look at both teams before their match:

Granada was on a streak of seven games without a loss in the league, until a few days ago when they were defeated by Getafe 4-2. During this streak, Granada had three wins and four draws. Overall, the team sits in the 14th spot in the standings, seven points ahead of the first team in the relegation zone. Granada was also recently eliminated from Copa del Rey in a disappointing showing against Mancha Real, a team from the fourth rank of Spanish football.

Health-wise, Granada is in a good shape. Neyder Lozano and Santiago Arias are the only players already ruled out of the upcoming game, while Ruben Rochina is questionable at the moment.

So far, Osasuna has been pretty inconsistent. In the last six games in the league, Osasuna has one win, two draws, and three losses, so they are clearly no at their best right now. Overall, they are in the 13th place in the standings, one spot ahead of their upcoming opponent. The team was also eliminated from Spanish Cup by Girona.

Osasuna will miss David Garcia and Unai Garcia after they have tested positive for coronavirus, although it's been more than a few days and we could see them if they can produce a negative result. Hernandez and Areso are also questionable right now, but they could get a chance if they end up being fit.

The usual questions for Granada vs Osasuna 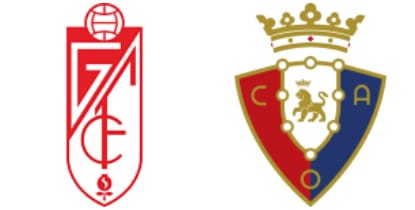