Freiburg revived their European ambitions with the recent win over Augsburg and they take on a struggling Hertha Berlin outfit at the Europa Park Stadium.

Freiburg produced a calm and composed game to beat Augsburg on their home patch with a 2-1 score. Nils Petersen and Nico Schlotterbeck were the scorers for Christian Streich’s men. Hertha Berlin were crushed by a 6-1 performance from RB Leipzig in the recent match. Stevan Jovetic’s goal only turn out to be a consolation for Hertha Berlin, who were reduced to 10 men in the 62nd minute when Kempf was sent off.

Hertha Berlin are going through a torrid run of form and there cannot be a better confirmation that the thrashing from RB Leipzig. Freiburg have returned to winning ways with the success over Augsburg and Streich’s men have been picking up home form in recent weeks with two wins in the last four. Hertha Berlin have suffered a defeat in seven out of the 11 away games this season. They are looking odds on to suffer a double at the hands of Freiburg this season.

Hertha Berlin have scored in six consecutive games against Freiburg. Even on the road, Tayfun Korkut’s men have been able to get a decent number of goals. Freiburg have not been defensively a rock-solid and they were tested on many occasions by Augsburg in the last match. Hertha Berlin have enough potential to do the same after managing to find the back of the net in five consecutive games.

Freiburg vs Hertha Berlin: Check out the best odds and the latest stats

Freiburg vs Hertha Berlin: Check out the team lineups

Christian Streich is boosted by the return of many key players to the starting line-up. Schlotterbeck has been able to recover from the stomach virus and COVID, while Sildillia and Flekken are also back from testing positive only recently.

Tayfun Korkut has a long line up of players unavailable for the game starting with goalkeeper Schwolow, who has tested positive. Lukas Klünter, Kevin-Prince Boateng, Jurgen Ekkelenkamp, Marvin Plattenhardt, and Dong-Jun Lee have all picked up the virus. Kempf is unavailable after the red card in the match against RB Leipzig. The biggest problem for Hertha Berlin might be the injury to Stevan Jovetic, who is doubtful with a thigh problem.

Questions About Freiburg vs Hertha Berlin 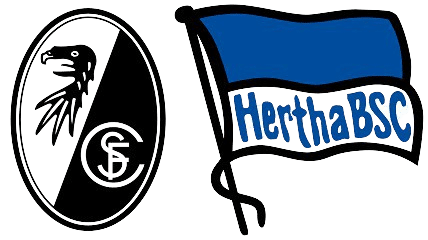 Who won the last h2h? 2-1 in favour of Freiburg vs Hertha Berlin.

Where is the game being televised? Europa Park Stadion.

Where is the game being played? Freiburg.

Which team is the favourite to win? Freiburg