Galatasaray vs Fenerbahce is coming up on February 7th. The biggest rivalry in Turkish football is set to play its next edition, and here you will find our Galatsaray vs Fenerbahce betting tips as usual. We aim to provide all the necessary predictions to inform your bets on the so-called Intercontinental Derby.

Here you can enjoy our predictions for the upcoming Turkish derby with just a single look. However, if you are keen on getting additional information surrounding this game, you can find it just down below the chart. 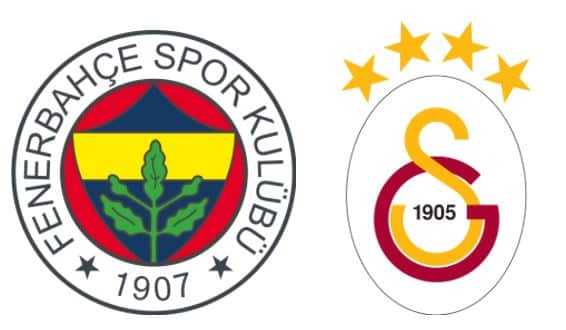 The Matchup between Fenerbahçe and Galatasaray is considered one of the fiercest Turkish clashes and one of the world's most bitter derbies. It is called “The Intercontinental Derby,” as the clubs' grounds are situated at the two different halves of Istanbul – the Asian and the European part of the city. The rivalry has been on for over a hundred years now, and there have been close to 400 games played between the two outfits. Historically, Fenerbahçe has the upper hand with 146 victories to the 124 of Galatasaray.

An exciting piece of information is that Galatasaray's supporters hold the record for the world's noisiest football crowd. Playing at the Turk Telecom Arena is an extremely intimidating experience for every guest side that's had the unappealing opportunity to face Galatasaray at home. That's why Fenerbahce must definitely be glad that it will be hosting the game and not traveling to the Turk Telecom Arena. Even though this currently isn't of that great importance as stadiums will most likely remain closed for fans.

Match preview: A slight edge for Galatasaray going into the upcoming encounter

Let's get back to the 07.02 fixture. Even in an equal campaign so far, Galatasaray seems to have the slightest of edges between the two Istanbul teams. The current table ranking sees both squads with 23 points in total, but the difference is that Fenerbahçe has played a game more than their opponents. Furthermore, The Yellow Canaries have the far more inferior goal difference of the two. Fenerbahçe has conceded 19 goals in 13 games and has a positive goal difference of just four. In the meantime, Galatasaray can be praised for their defensive play, only allowing nine goals to get past them.

The last meeting between the two resulted in a goalless draw, a result to which this rivalry is no stranger. Four of the last seven Intercontinental Derby editions have ended with no goals. It seems like there is a chance for this game to not be any different, but no one would want to see that happen. That's why we've moved on from the idea of predicting a goalless draw, and the next most appealing outcome for us has to be Galatasaray taking home the three points. This will be a game of great importance to the league rankings, as a win going in anyone's direction may have a significant impact on the final standings.

Galatasaray vs Fenerbahce predictions explained: Why choose these picks?

Here we will provide you with a little more elaborate explanations as to why we've chosen to bet on these particular markets. Let's first remember what our free predictions looked like.

The Yellow-Reds seem to be the squad that possesses a greater threat to the other and has also displayed a magnificent defensive form. Fenerbahce has been scoring quite a lot as well but has conceded way too many goals for us to declare them favorites to win. We predict that Galatasaray will win to nil.

This particular derby hasn't been previewed as a rivalry with a lot of goals. In fact, it's the opposite. Facing each other, these two sites rarely score a lot of goals. This pick has hit in the last 6 out of 8 games between the two. We believe that the next fixture will be no exception.

The Turkish Super Lig is known to be somewhat violent, especially when it comes to rivalries. There are around 3-4 cards on average, which is just on a regular day. When a derby is regarded, especially the great Intercontinental Derby, the number of cards in the game may quickly get out of proportion. Just for comparison, the last time that these two sides met, the game ended in a 0-0 draw with 11 yellow cards. It makes you wonder how there wasn't a red one as well. The good news is that a red card also counts towards completing this bet, so make sure to take advantage of it.

Can't wait for this match to come along? Check out today's football betting tips instead.