Watford were officially relegated from the Premier League at the weekend and can now start to plan for life back in the Championship. Everton provide the opposition on Wednesday night and after winning away at Leicester to pull themselves out of the bottom three, the Toffees arrive at Vicarage Road full of confidence

We're backing the former Watford striker, Richarlison, to net at least one goal during the 90-minutes on Wednesday. The Brazilian top scores for Everton in the league with 8-goals and has found the seven times in his last nine games for club and country, so you can see just why we're backing Richarlison to score against his former employers this week.

Can Everton record back-to-back away wins for the first time this season?

Watford went down 1-0 to a Zaha penalty away at Crystal Palace at the weekend, a result that confirmed their relegation from the Premier League. To add insult to injury, Kamara was sent off in the 68th-minute and will miss the Everton game, while Cleverley and Samir both picked up injuries that could keep them out of the match as well.

Everton put in their best away performance of the season just when they needed it, beating Leicester 2-1 at the King Power Stadium. Mykolenko volleyed Everton in front in the 6th-minute, a truly stunning effort from the Ukrainian international. The Foxes got back onto level terms after a mix-up in the defence between Coleman and Mina gifted Daka a one-on-one that he was never going to miss, but the Toffees moved back in front when from a corner, Richarlison's header was saved but fell right into the path of Holgate who headed home from close range to make it 2-1. Everton held onto their advantage to secure a massive 3pts in their bid to escape the dreaded drop.

Watford: Hernandez, Kucka, Pedro, Louza, Cleverley and Samir look set to miss out on Wednesday through injury, while Kamara is suspended.

Questions & Answers for Watford vs Everton 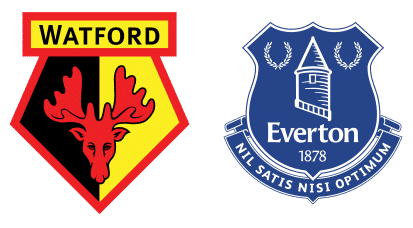