One of the toughest games to predict in the upcoming La Liga round is the Elche vs Valencia duel. If you want to learn more about it and get some free betting tips, check our preview of this match.

Our latest Elche vs Valencia betting predictions and picks

If you are looking for some help to find the right Elche vs Valencia bet, you've come to the right place:

Four of the last five h2h duels between Elche and Valencia have gone over 2.5 total goals and we don't see any reasons why that won't happen again in their next game.

Both teams have scored there of the last five head-to-head meetings between Elche and Valencia and we can see that being the case once again on Saturday.

After all, both teams have scored in 71% of all Valencia matches in La Liga until now, while the same is true for 57% of all Elche games this season in the league.

The top odds, stats, and more for Elche vs Valencia

If you are looking for the best La Liga odds, including the odds for Elche vs Valencia, you can find them all right here:

This is a very close game and we expect the match to be very entertaining. So, let's check both teams out in more detail now:

With three wins and three losses in the last six games, Elche has done well and they are keeping their distance from the relegation zone at the moment since the team is currently in the 14th place in the standings and eight points ahead of the first team in the zone. So, with ten games left to play, Elche can be pretty confident about their chances of survival.

Javier Pastor will be back in the team after serving his suspension in last round, while Helibelton Palacios will miss the game with an hamstring injury.

The Bats are having a solid season in La Liga where they are currently ninth, but they are pretty much stuck in the middle of the standings and unlikely to move up to fight for a spot in European competitions. That being said, Valencia reached the final in Copa del Rey and if they can win it, they will secure a spot in Europa League for themselves.

Meanwhile, the team will be without a few players who are currently injured, including Jose Gaya, Jasper Cillessen, Koba Koindredi, and Toni Lato.

The most common questions for Elche vs Valencia 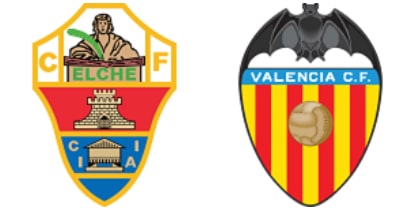