The first game in the upcoming La Liga round is the Elche vs Real Madrid duel, so check our preview of this game and some of our favourite betting tips we chose for you.

If you need help, check our Copa del Rey betting tips, along with our predictions for the Elche vs Real Madrid duel:

Only a few days after winning the Super Cup, Real Madrid is playing to reach the quarter-finals of Copa del Rey. Since the team has been in great form this season, we have no doubt that they will win this game.

That being said, Elche is not in bad form either with three wins in the last six games in La Liga. Still, Real Madrid is a league above them in terms of quality and form and they've beaten Elche in four of their last five head-to-head duels.

Three of the previous five h2h meetings between Elche and Real Madrid have gone over 2.5 total goals and we can see that happening once again on Thursday.

After all, Real Madrid averaged 3.00 goals per game this season in the league and they generally play offensive football in all games. Meanwhile, Elche averaged 2.33 goals per game in La Liga so far.

The best stats and odds for Elche vs Real Madrid

If you want to bet on the top odds for Elche vs Real Madrid, check our selection of odds taken from different betting sites:

With both teams in good form, this should be a good match. So, let's take a closer look at both teams right away:

With three wins, one draw, and two losses in the last six games in La Liga, Elche is doing pretty well lately. The team climbed up to the 15th spot in the standings and they are now five points away from the first team in the relegation zone. Now, the team will try to upset Real Madrid and reach the quarter-finals of Copa del Rey.

Fidel, Palacios, and Kiko Casilla will likely miss the game after they tested positive for COVID recently. Meanwhile, Bigas, Verdu, and Boye should be back from recent injuries, if they can pass a fitness test.

So far, Real Madrid can be very happy with their season. The team is currently first in La Liga, five points ahead of Sevilla in second place. They also reached the Top 16 stage of Champions League, and they enter the game against Elche in the Top 16 phase of Copa del Rey after winning the Spanish Super Cup over the weekend. So, things are obviously going very well in Madrid.

That being said, Real Madrid has a few personnel issues. Marco Asensio, Gareth Bale, and Mariano Diaz are all out of the upcoming game with injuries. Also, Eder Militao has to serve a suspension, while Dani Carvajal is questionable with coronavirus. 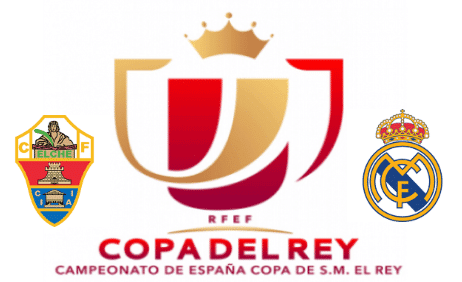