While the Elche vs Granada duel may not sound too exciting, it can be one of the more interesting matches of this La Liga round. So, check our preview to learn more about the game and to get some free betting tips.

Our top Elche vs Granada betting tips and predictions

If you are looking for free La Liga betting predictions, including our top picks for Elche vs Granada , check them out right here:

With both teams affected by the pandemic, we won't be seeing the best teams by either team in this match. However, Granada so far has fewer positive cases and they have been in much better form recently.

In addition to this, Granada beat Elche in their last three h2h meetings, so our prediction is for Granada to win this match and keep their good streak going.

Both teams have scored in three of the last five head-to-head duels between Elche and Granada, so we can see the same thing happening in their upcoming match as well.

Furthermore, both teams have scored in 61% of all Elche games in the league this season, while the same is true for 67% of all Granada matches in La Liga until now.

The latest odds and stats for Elche vs Granada

If you are looking for the best Elche vs Granada odds, you can find all of them right here on our website:

While the guests are in better form, the home team will be hoping for a good result here. With that in mind, let's take a detailed look at both teams:

With just one win in the last five matches in La Liga, Elche has clearly struggled lately. To make matters worse, they haven't been that great before this bad stretch, so the team is currently at the same number of points as Alaves, the first team in the relegation zone. Overall, it's clear that Elche has tough road ahead of them in their fight for survival in La Liga.

As with many other teams in Spain, Elche has also been affected by a surge of coronavirus cases, so they will be without a few players due to this, including Boya, Perez, Milla, and Marcone, at the very least.

After a poor start, the semi-finalists of Europa League last season have managed to get into form and climb up the standings. Now, the team is sitting in the twelfth place in La Liga and the fans can breathe a sight of relief. Granada has been in great form recently, with three wins and two draws in the last five games.

The most common questions for Elche vs Granada 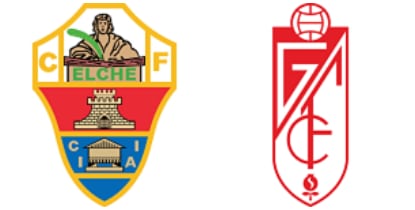