The last game to be played on Sunday in La Liga is the Barcelona vs Mallorca duel, so check our preview of this game if you are interested in learning more about it.

Our best tips and predictions for Cadiz vs Elche

If you are struggling to find the right bet for Cadiz vs Elche, check our top betting picks for this duel:

Although Elche is still theoretically in danger of relegation, they are pretty much safe from it right now. Meanwhile, Cadiz is right there, one point above the relegation zone, so they need this win to stay ahead of the curve with the end of the season looming.

That being said, Cadiz failed to beat Elche in their last five head-to-head duels, but we can see that changing after this game, especially since they've been in similar forms recently and with Cadiz hosting the game.

Both teams have scored in the last three h2h meetings between Cadiz and Elche, so we can see that trend continuing in their upcoming duel too.

In addition to this, both teams have scored in 50% of all Cadiz matches in La Liga this season, while the same thing happened in 56% of all Elche games in the league so far.

The best odds and important stats for Cadiz vs Elche

If you are looking for the best La Liga odds, including the odds for Cadiz vs Elche, you've come to the right place:

This is one of the least anticipated games in the round, but we still expect to see a good game. So, let's check both teams out in more detail:

With two wins, two draws, and two losses in the previous six games in the league, Cadiz remains in danger of relegation. They are outside of the relegation zone right now, but they are just one point away from Granada, the first team inside of the zone at the moment. So, Cadiz will have to get some points in the remaining four games if they want to be in La Liga next season as well.

When it comes to team news, Cadiz will again be without Varazdat Haroyan and Florin Andone , but they are otherwise in good shape heading into the final stretch of the season.

Thanks to two wins and a draw in the last three games in La Liga, Elche can enter the final four games in the league with a piece of mind. Although they could still theoretically get relegated, that is a very unlikely scenario, but the team will certainly do everything in their power to avoid even a whiff of danger.

However, Elche will be without injured Gonzalo Verdu and Lucas Boye, while Raul Guti and Pedro Bigas will also miss the game after suffering concussions. 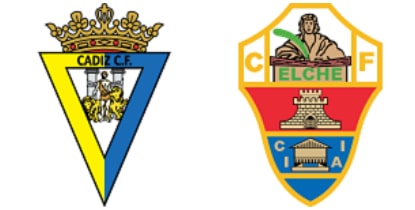