Following their dismantling by Borussia Munich in the German Super Cup, Borussia Dortmund disappointed in their 2-1 defeat to Freiburg. They have another tough task on their hands as the unbeaten TSG Hoffenheim makes the trip to the Signal Iduna Park for this Friday night fixture.

Hoffenheim to Win or Draw

Borussia Dortmund has lost matches in succession and their winless run will extend as TSG Hoffenheim makes the trip to Signal Iduna Park. Die Kraichgauer have not tasted defeat in the last three editions of this fixture. Moreover, they are unbeaten in their last nine Bundesliga outings, claiming the best record amongst all top-flight German teams. Across this period, they have accrued advantage seven times but have rallied to take points off their rivals.

Borussia Dortmund signifies goals. All four of their competitive outings in the 2021/22 campaign have concluded with an Over 2.5 goals scoreline and this meeting should not be any different. Hoffenheim's three matches of the campaign have concluded with a similar high scoring goals tally. Moreover, this match has been high scoring historically as well with four of the last five duels finishing with at least three goals for the spectators' entertainment.

Despite losing to Freiburg, Dortmund managed to score in their 34th successive Bundesliga game. They can be relied upon to score and should increase their record to 35 matches. Hoffenheim too will fancy their chances given their unnerving ability to come back into fixtures. The fact that Erling Haaland and Andrej Kramaric will be taking the pitch in this meeting should be enough to put money on both sides hitting the back of the net.

Dortmund vs Hoffenheim: Check out the best odds and the latest stats

Match Preview of Dortmund vs Hoffenheim

After impressing in Marco Rose first two matches in charge, Borussia Dortmund returned to its old ways. They were unable to deal with Bayern Munich in the German Super Cup and followed it up with a disheartening performance against Freiburg. They need to address their weaknesses and could not have hoped for a worse time to take on TSG Hoffenheim.

Die Kraichgauer are one of the few sides that continue to haunt Der BVB at the Signal Iduna Park. Their last three trips in the Bundesliga has seen them claim two draws and a victory. While Dortmund has stuttered, Hoffenheim has remained unbeaten in their last nine German top-flight outings, the best current unbeaten run in Bundesliga.

Questions About Dortmund vs Hoffenheim 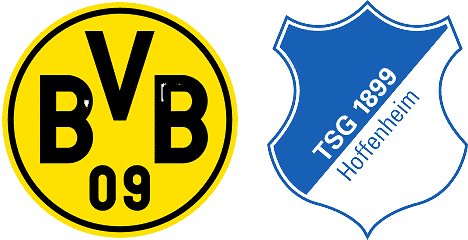 Which team is the favourite to win? Borussia Dortmund.