The coming weekend is going to feature one of the most exciting fixtures between Bayern Munich and Borussia Dortmund. Both teams enter the field following their winning sequence of Bundesliga outings.

Bayern Munich played two winless games in the last four attempts but has succeeded four consecutive times in the 2021-22 campaign of Bundesliga. The Bavarians also won four of the last three home duels. On the other side, Dortmund are making turns of wins and draws from the previous four away outings and won only two of the recent five. Back to the latest H2Hs, Bayern secured the lead in all of the last five. So we predict another home advantage for the Reds to continue their winning streak in Der Klassiker.

Bayern and Borussia to exchange blows

Bayern and Dortmund have secured two clean sheets in their respective last five games, however, the recent all H2Hs witnessed both teams on the scoring side. The Reds have scored consistently in all of their previous home games. The Black and Yellows also rattled the net in all of the recent outings. So we will be waiting for another BTTS outcome in this Der Klassiker. But three clean sheets out of the last five hosting H2Hs will help the Reds to restrict the rivals to a low score.

Bayern Munich vs Dortmund: Check out the best odds and the latest stats

Bayern Munich vs Dortmund: Check out the team lineups

The Bavarians recently fell out of the Champions League but cleared the lead for three more points in the last game with a victory against Arminia Bielefeld, standing at the first of the Bundesliga table. Bayern Munich has lost only three of the 30 attempts of this season. The club manager Julian Nagelsmann will report five fitness issues in the teams before this game.

The Black and Yellows got their consecutive second league winnings in the last game against Wolfsburg. However, the recent winless games left the team with a trail of nine points from the first position, standing at second. The club boss Marco Rose will be disappointed to have 11 players out of the game due to fitness issues.

Questions About Bayern Munich vs Dortmund 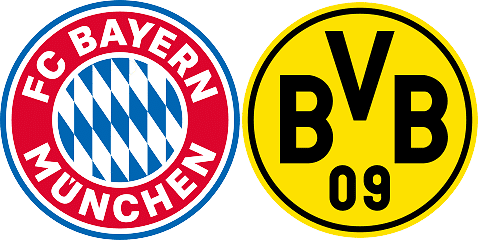